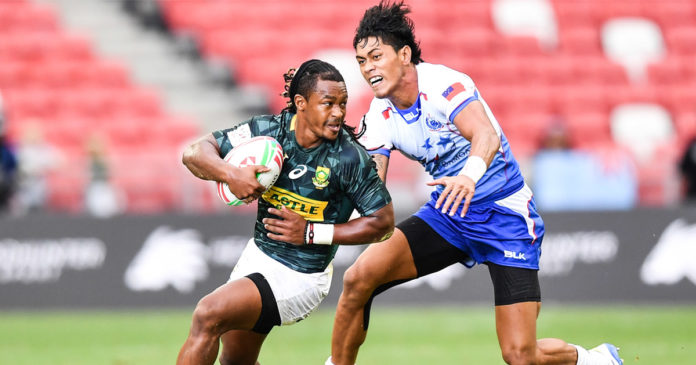 After 71 tournaments in the HSBC World Rugby Sevens Series, one could expect Blitzboks sweeper, Branco du Preez, to show some reluctance in boarding another intercontinental flight to yet another tournament on the other side of the world.

This time, Du Preez and his fellow Springbok Sevens team mates departed Cape Town for New Zealand, where the third tournament of the World Series will take place on 25 and 26 January at FMG Stadium, with arrivals in Johannesburg, Sydney and Auckland before a final bus trip to Hamilton.

Not so for Du Preez, in fact, the 29-year-old was all smiles and buzzing as the team left South Africa on Saturday.

“Very excited to be part of the squad again, having missed the opening two tournaments in Dubai and Cape Town,” the most experienced Blitzbok of all time said.

The Blitzboks won the season-opener in Dubai and were losing finalists at their home tournament in Cape Town a week later to share the lead the log table with New Zealand, and Du Preez indicated that they are keen to continue that form.

“We started well in the past and managed to maintain that form, and that helped us to perform well in the World Series. From that perspective, two very important tournaments await us, with Sydney following a week after Hamilton, according to Branco.

“Good performances will stack up the points and that is what you are playing for, after all,” added Du Preez.

“We are not getting ahead of ourselves though. The focus remains on Japan in our first match. Past experiences have shown that if we stick to what we want to achieve and trust our structures, the result looks after itself. So, we are preparing for game one, day one, and making sure that through that performance we lay the foundation for us.”

The format for the tournament in Hamilton has changed, with no quarterfinals taking place and only the four pool winners going into the Cup semi-finals. For Du Preez and the Blitzboks, that does not change their attitude, despite the cut-throat reality of matches against England and Kenya later in the pool.

“We always aim to top our pool anyway, so nothing will really change in that regard. The pressure will be high as you cannot afford to drop a match, but we prepared well and will be ready to confront that.”

The squad will be led by Stedman Gans, with Siviwe Soyizwapi out injured.

Du Preez gave the new captain the thumbs-up: “He has the attributes to do well. We are an experienced squad with a lot of senior players and all of us will support Stedman where needed,” said Du Preez.

Kok and Afrika, like Du Preez, makes a first appearance in the World Series, as will Muller du Plessis, Angelo Davids and Gans.

“Those guys are very keen to go out and do the business. We love playing for each other, for our families and for our country and the knowledge that those opportunities are on the doorstep will make any long-haul flight a pretty short one,” concluded Du Preez.