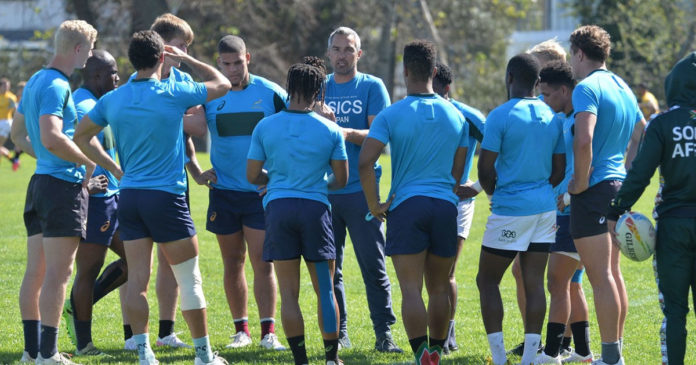 Springbok Sevens coach Neil Powell has named four uncapped players in his 13-man squad to travel to Canada this weekend for tournaments in Vancouver and Edmonton later this month.

Ronald Brown, Darren Adonis and Shaun Williams will all make a first HSBC World Rugby Sevens Series trip with the Blitzboks, while Christie Grobbelaar is in line to make his first appearance for South Africa, although he has travelled with the team before – to Dubai in 2019 as 13th player.

Brown represented South Africa at the recent Olympic Games in Japan, but will now don the Springbok Sevens jersey for the first time at the tournaments to be played at BC Place in Vancouver on 18-19 September, and a week later, on 25-26 September, in Edmonton’s Commonwealth Stadium.

Like in Tokyo, all 12 countries competing will be allowed to use all 13 players available in their squads during the tournament.

Regular Springbok Sevens skipper Siviwe Soyizwapi will board the plane at the most experienced player in the squad, having played in 30 tournaments, while Powell included a number of World Series regulars.

One of them, Ryan Oosthuizen, returns to the squad after injury ruled him out of Olympic Games contention, and Dewald Human makes a return to the squad having last played at the HSBC Paris Sevens in 2019.

Olympians Branco du Preez, Selvyn Davids and Justin Geduld were not considered due to injury, while Chris Dry has announced his retirement from international sevens. Stedman Gans and Kurt-Lee Arendse has re-joined the Vodacom Bulls since returning from Tokyo and Ruhan Nel linked up with the DHL Stormers again.

Powell welcomed the energy the new recruits will bring and said their inclusions are well deserved.

“We do have a number of players unavailable, but the debutants have been knocking on the door while playing for the Academy side in various invitational tournaments around the world and Ronald even forced his way into the Olympic squad,” said Powell.

“This is their opportunity to show they are ready to become World Series regulars and I have a lot of confidence in their abilities.”

Powell said the injuries to Davids, Geduld and Du Preez were setbacks, but the positive is the opportunities it has created for the debutants.

“Another plus is the fact that we are back playing in the World Series again,” added the Blitzbok coach.

“It has been quite a while since that last tournament in Vancouver in 2020 and it does feel like some normality coming back, traveling to Canada and playing again.

“It is a pity Fiji, New Zealand, Samoa, Australia and Argentina are not able to travel to Canada, but I believe this will still be a very competitive tournament. The fact that there will be crowds will also boost the players.”

The pools and match schedules will be announced by World Rugby during the weekend.

The Springbok Sevens squad (with caps and points):