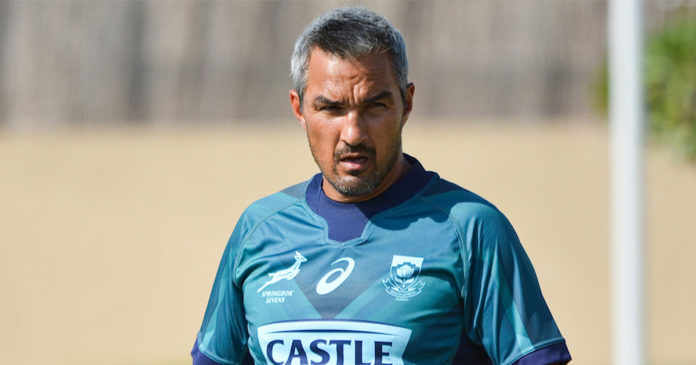 Springbok Sevens coach Neil Powell knows the route to the top of the podium at the Emirates Airline Dubai Sevens – he has after all lifted the trophy more than once as a player, and watched his team do the same as a coach.

The Dubai tournament – the first of ten in the 2019/20 HSBC World Rugby Sevens Series – starts at The Sevens Stadium on Thursday, with the Blitzboks playing Kenya in their only match of the day.

Ann according to Powell, the Blitzboks arrived in Dubai confident after good preparation in Stellenbosch for the last two months.

“We also played in a warm-up tournament, so a lot of things we wanted to do have happened – but the real test remains here in Dubai when the tournament and series start,” said Powell.

South Africa have won the Dubai title six times before and for Powell a good start has always indicated what the season has in store for the Blitzboks.

“The pre-season normally manifests itself here and in Cape Town next weekend, but I think we have laid a good foundation for the opening two weeks,” he explained.

“There are a couple of challenges though. We needed to get through the 10-hour flight and its effects, and then a slight mindset change as the tournament is now starting a day earlier and will be played over three days and not the usual two.”

Powell was happy with the preparation done this week too: “We hit the ground running and both our attack and defence sessions went well. We will have our final prep in the morning before we take on Kenya tomorrow evening for our first match.

“We have a couple of new things that we will try and the test for that will be this weekend. It worked well on the training pitch, but only a live match will give you the real result,” he said.

Powell brought back some players with the Olympic Games in 2020 in mind. The likes of Dylan Sage, Seabelo Senatla and Ruhan Nel missed last season’s series, but they are back in action where they won the last time they played in Dubai.

“We have the Olympics as an end goal, but everyone realises the here and now aspect of Dubai. The focus is here, and we are looking for the effort this weekend,” said Powell.

Referring to Sage, Senatla, Nel and Rosko Specman, Powell said: “Those guys have worked hard with us in the last couple of weeks to fit back into our systems. They have individual excellence, but it will be how they fit into the overall team structure that will determine their successful return or not.

“Our objectives for the weekend are quite simple – we want to build a good foundation, not only for next weekend, but for the remainder of the season. We want to do well and get the pointers on those things we are doing right,” the coach explained.

Meanwhile Powell will also have a keen interest on the performances of the SA Rugby Sevens Academy team, who starts their campaign against the Royal Jesters in the International Invitational tournament on Thursday.

Several Blitzboks stalwarts will be in action and Powell will also be eager to see the progress made by new recruit Hacjivah Dayimani, as well as Werner Kok, who returned from the French Top 14 recently.

The Blitzboks face Kenya at 17h54 (SA time) in Pool D. They face Spain and England in their remaining pool fixtures on Friday. The Academy side take on the Royal Jesters at 11h20 (SA time) and French Military at 13h20 on Thursday.

The Blitzbok squad is: