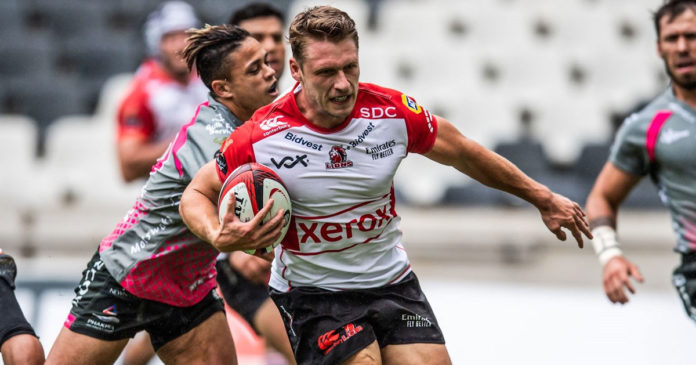 Second New Year brought relief for some teams in the Carling Currie Cup, but for defending champions, the Toyota Cheetahs, their challenge this season ended in last-minute heartbreak in Bloemfontein.

Three action-packed games were played on Saturday, with 20 tries scored between the six sides, with the Cell C Sharks contributing seven in their 47-19 victory over Tafel Lager Griquas in Durban.

The first match of the day, in Nelspruit, was a ding-dong affair, but in the end the Xerox Lions – with Tiaan Swanepoel (fullback) leading the charge – won their fifth straight Carling Currie Cup match, by 33-25, over a fired-up Phakisa Pumas side.

And in Bloemfontein, the drama reached boiling point as Tim Swiel slotted his final and seventh penalty goal on the stroke of full-time to steer DHL Western Province to a 31-29 win over the Toyota Cheetahs, moments after the home team launched a stunning comeback.

With the rescheduled clash between the Vodacom Bulls and Xerox Lions at Loftus Versfeld taking place on Wednesday, 6 January (16h00), and one round of action remaining thereafter, the top four teams have been decided, with home ground advantage in the semi-finals still up for grabs.

The Toyota Cheetahs (27), Phakisa Pumas (12) and Tafel Lager Griquas (7), meanwhile, will be aiming to finish the season on a high next weekend.

Talented Xerox Lions fullback Tiaan Swanepoel scored a brace of tries and kicked four penalty goals to steer his team to a valuable 33-25 victory against the Phakisa Pumas in their round six Carling Currie Cup encounter in Nelspruit on Saturday.

The victory for the Xerox Lions saw them extend their winning run to five matches in the competition this season, while it also kept them in the running for a semi-final berth with one pool match remaining – on Wednesday against the Vodacom Bulls in Pretoria.

The Phakisa Pumas scored two tries to one by the Johannesburgers in the first half to enter the break 17-13 ahead, but roles were reversed in the second half as the home team conceded two tries and scored one.

But the costly penalties they conceded, which Swanepoel slotted over with ease, did not assist the Lowvelders’ cause, and this paved the way for the Xerox Lions to snatch a 33-25 win in the end.

The Cell C Sharks cemented their place in the Carling Currie Cup semi-finals with a rewarding 47-19 bonus-point victory over Tafel Lager Griquas in Durban on Saturday, thanks to an impressive seven-try romp.

The Durbanites were in hot form in the first half, scoring four tries to one by Tafel Lager Griquas, which pushed them into an encouraging 26-7 halftime lead, and they added three more tries in the second half to guarantee the satisfying victory.

The men from Kimberley had the first say with Enver Brandt (winger) touching down 40 seconds into the match after tapping a loose ball from an ineffective long pass by the Cell C Sharks and gathering it to score.

The hosts hit back minutes later with former Junior Springbok hooker Fezokuhle Mbatha touching down from a rolling maul, but the unsuccessful conversion attempt by Curwin Bosch (flyhalf) left them trailing 7-5.

The Cell C Sharks soon took control of the match thanks to their effectiveness at converting their chances into points and several minutes later they were three tries up.

They added three tries in the second half to take their tally to seven, and while the men from Kimberley fought with intent in the second half, with Gideon van der Merwe (flank) scoring a brace of tries, the Durbanites’ proved too strong on the day.

A Tim Swiel penalty goal on the stroke of full time handed DHL Western Province a hard-fought 31-29 Carling Currie Cup win, which ended the Toyota Cheetahs’ chances of reaching the semi-finals and defending the crown they won in 2019.

It was heartbreak for the Free Staters after they launched a brilliant comeback in the second half – with two tries in quick succession – to take the lead late in the match.

The home team actually “won” the second stanza 20-14, but it wasn’t enough and unfortunately for the Toyota Cheetahs, Swiel (flyhalf) had the final say with his seventh penalty goal, awarded to the Capetonians off the back of yet another devastating scrum.

It’s fair to say the DHL WP scrum was the big difference between the two sides, but the Capetonians also defended very well, and made better use of their opportunities on attack.

Apart from struggling in the scrums, the Toyota Cheetahs were left ruing some ill-discipline and unnecessary errors which robbed them of attacking continuity.