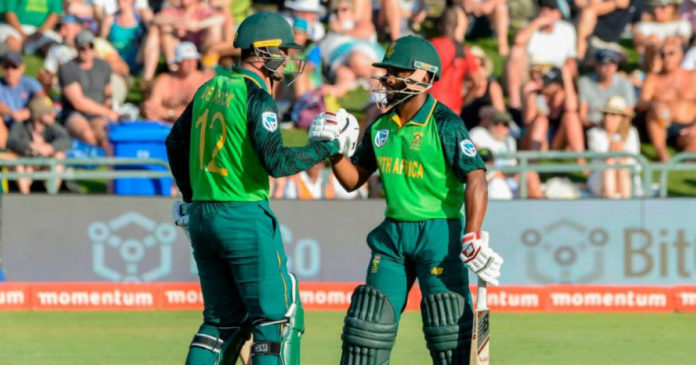 Quinton De Kock stamped the leadership style he intends to bring to the Standard Bank Proteas in the run-up to the next ICC Men’s Cricket World Cup with his 15th century in the longer white ball format and his 5 000th career run in the opening Momentum One-Day International at Newlands on Tuesday.

With Temba Bavuma scoring 98 from the No. 3 position and sharing a second-wicket record partnership against England of 173 with De Kock it was a big occasion for the Proteas for many different reasons.

The Proteas won by 7 wickets with 14 balls to spare to go 1-0 up in the three-match series and more importantly gaining a vote of confidence as a young side that has something substantial to build on.

De Kock won the toss and backed his bowlers to give him something that would be a reasonable chase, and this is what they did, restricting England to 258/8 after having them 131/6 at the end of the 38th over.

At that stage it looked as though England would battle to bat out their 50 overs and that they did was the result of a seventh-wicket partnership of 91 off 99 balls between Joe Denly and Chris Woakes and then a further 32 off 31 balls between Denly and Tom Curran.

After the early loss of Reeza Hendricks, Momentum Man of the Match De Kock (107 off 113 balls, 11 fours and a six) and Bavuma (98 off 103 balls, 5 fours and 2 sixes) made light work of the target with both having a strike rate of as close to 100 percent as makes no difference.

Bavuma excelled with his running between the wickets and played the shot of the match when he pulled Woakes, who was far and away England’s best bowler, some 15 rows back into the crowd at backward square leg.

The fact that De Kock had a relatively low percentage of boundaries for a player of his natural instincts was testimony to his ability to play the situation and the conditions on a slow pitch on which the spin bowlers sent down a large number of the overs.

Tabraiz Shamsi (3/38) was the kingpin of the Proteas attack and he and debutant Jon-Jon Smuts had combined spin bowling figures of 4/81 from their 20 overs.

Shamsi tore the heart out of the England middle-order after Rassie van der Dussen had produced a direct hit run out to remove the dangerous Joe Root.

With Lutho Sipamla also making his debut and claiming a maiden wicket the Proteas went into the match with six bowlers who had played less than 100 ODIs between them with Andile Phehlukwayo being responsible for more than half of those caps.

This is a team that can only get better as they grow in experience and the future is starting to look a lot brighter than the immediate past.