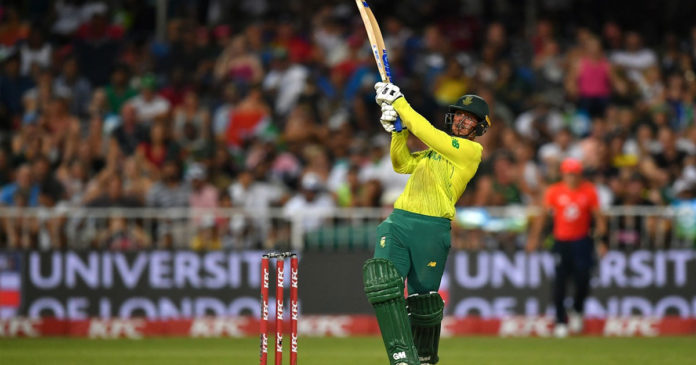 Quinton De Kock hit the fastest half-century for the Standard Bank Proteas in the history of T20 International cricket but in the end it was England that triumphed by two runs in a high scoring second KFC T20 International match at Hollywoodbets Kingsmead on Friday.

The two teams thus travel to SuperSport Park for Sunday’s series decider with the teams locked at 1-1 going into the final match of England’s tour.

The match was another magnificent advert for the T20 format.

De Kock, having reached his half-century off just 17 balls as the Proteas went in pursuit of a tough victory target of 205, went on to finish on 65 off 22 balls (2 fours and 8 sixes) and, when he was dismissed, the Proteas promoted David Miller up the order to No. 3 to keep the momentum going.

The Proteas stayed ahead of England’s comparative run rate for three-quarters of their innings but were not able to do so at the death in spite of some power hitting by Rassie van der Dussen (43 off 26 balls, 2 fours and 3 sixes) and Dwaine Pretorius (25 off 13 balls, 2 fours and a six).

Chris Jordan was again the star bowler for England at the death and for the second match in a row had a chance for a hat trick with two wickets off successive deliveries.

But in the end the decisive part of the match belong to Moeen Ali who struck 39 off only 11 balls (3 fours and 4 sixes) and enabled England to score 89 off their final 6 overs at a rate of almost 15 to the over.

In the first part of their innings England had a similarly destructive contribution from Jason Roy and Jonny Bairstow who put on 52 for the second wicket in 4 overs.

Moeen’s effort earned him the KFC Man of the Match award.