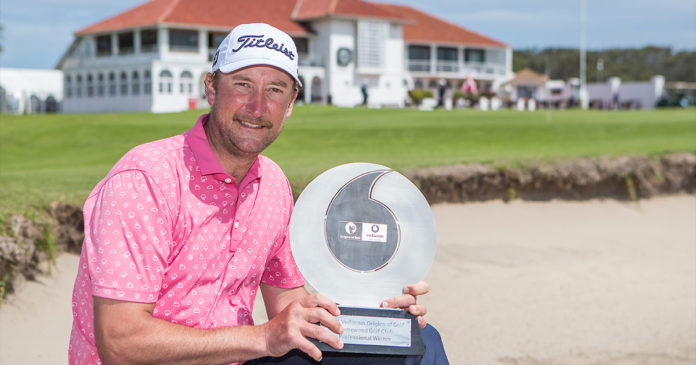 Daniel Greene secured his first Sunshine Tour title in his 12th season on tour at the Vodacom Origins of Golf Series Humewood event on Saturday and it took all of his composure and skill to secure the playoff win over Tristen Strydom as it was blowing a gale on the links course.

Greene completed a solid par on the first playoff hole, on the par-four 18th, while Strydom could only get a bogey after he hit his second shot well right of the green. It was a bitter blow for the 24-year-old who was also chasing his first victory on tour, Strydom missing a shortish putt for par on the last hole of regulation play.

Making the turn on two-under for his round, Greene then did exceptionally well to come home in level-par as the players faced the worst of the wind. The 36-year-old was helped by a crucial eagle on the par-five 11th.

When Strydom bogeyed the 17th it meant they were all-square going up the last and Strydom wasted a golden opportunity to win as he was lying just off the green and decided to chip his third instead of putting.

Steve Surry, Christiaan Basson and Malcolm Mitchell, who blazed through the last nine holes in four-under-par to finish with a level-par 72, all finished just one stroke off the lead on four-under-par, proving that the leaders cannot take anything for granted when conditions were as tough as they were at Humewood on Saturday.

But Greene, who has a strong record in Vodacom events on the coast, showed he could adapt and remain unflustered despite how testing the situation was.