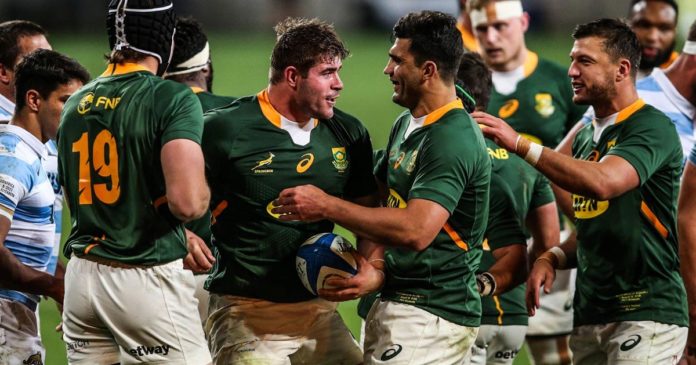 Springbok coach Jacques Nienaber praised his players after completing a run of matches that he described as “six tests” with a 29-10 victory over Argentina at the Nelson Mandela Bay Stadium on Saturday.

Nienaber linked together the SA ‘A’ match and three Tests against the British & Irish Lions, and the two Castle Lager Rugby Championship matches against Argentina as a single run, which yielded five victories and a solitary defeat in the first Lions test.

“I’m unbelievably proud of the squad of players,” said Nienaber.

“This was a massive test match for us; not bigger than a World Cup or a British & Irish Lions series match, but it was huge for us internally.

“If you take the perspective of the SA ‘A’ match against the Lions and then three Test matches against them and then two really tough Tests against Argentina, it was six Test matches in a row and at the end of it I can just say well done to the guys.

“The players deserve all the credit; it’s them sacrificing themselves for their country and their team; I’m massively privileged to work with people like that.”

Captain Siya Kolisi also highlighted the threat that the Pumas posed; a team that he likened emotionally to his own and one which he knew was determined to improve on their showing in the 32-12 first test defeat.

“We’re very similar in many ways and we love playing against them,” said Kolisi.

“But we stuck to our game plan and we built on the scoreboard; I wished we could have capitalised on the opportunities we created. But we made mistakes in lineouts and they defended well; they were a very different team to the one we played last week.”

The Boks needed to score three or more tries than Argentina to claim the bonus point but ended up conceding a try in the final moments – only the third they had conceded in six tests in 2021, including the season opener against Georgia.

“We weren’t disappointed to concede the try,” said Nienaber.

“Maybe ten years ago I wouldn’t have said that, but we were going for the bonus point try and we told the guys to go for the big defensive reads and take chances.

“If we had got the bonus point try it would have been worth it. We were in a position where we could go for it, so it wasn’t a risk.”

The Springboks will remain in Nelson Mandela Bay until a decision is taken on the re-scheduling of the competition’s remaining fixtures and Nienaber said they were ready for any eventuality.

“We would like to play the Rugby Championship in South Africa; we’ve proved we can do it,” he said.

“But we’ll play anywhere we have to. We’ve got six scenarios ready and when the decision is made, we’ll put it into action.”