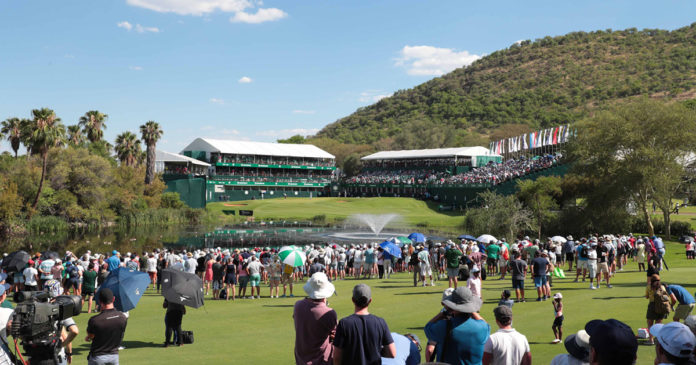 The Nedbank Golf Challenge hosted by Gary Player has reaffirmed its status as one of world golf’s premier sports events as the 2019 edition delivered record attendance figures, sold-out hospitality, an unprecedented fan focus, and an overall product that is constantly evolving in its ability to capture the attention of golf fans and non-golf fans alike.

This was “Africa’s Major” in every sense as the increased prize money, quality field, expanded Public Hospitality Village, a host of exciting new activations for the public, and the 40th anniversary of both Sun City and the Gary Player Country Club all resonated with fans who attended this prestigious Rolex Series tournament on the European Tour from 14-17 November at Sun City.

Over 20 000 people streamed into Sun City on both the Saturday and Sunday of the tournament, which alone was an almost 2% increase on the 2018 attendance figures for the weekend of the Nedbank Golf Challenge.

The attendance figures mark a record for the event since it became part of the European Tour in 2013.

The Nedbank Golf Challenge remains South African sport’s premier hospitality event as hospitality sales have increased by 25% from 2017 to 2018, and this year the Circa 18th Green package – the flagship hospitality offering – was already sold out for the weekend weeks before the tournament.

The strong challenge of South Africa’s Zander Lombard and Louis Oosthuizen going into the final round and then a late-charge by European Ryder Cup hero Tommy Fleetwood to overcome a six-shot deficit and win “Africa’s Major” appealed to every golf fan’s sense of excitement around the event.

But the major focus this year was on enhancing the fan experience of one of the great sporting spectacles on the planet.

The undoubted highlight of this was the debut of “Africa’s Mini Major”, which gave fans the opportunity to be part of the golf action like never before.

The competition included a six-hole putt-putt course with holes located in various positions around the Gary Player Country Club. After registering on the Nedbank Golf Challenge App to create a player ID, spectators went from hole-to-hole and tested their putting skills against each other over the four days of the tournament.

Each day there was a live leaderboard on the App for “Africa’s Mini Major”, and the fans who ended the day tied in first place had to putt-out on the iconic ninth green after play to decide the day’s champion.

The daily winners of the Thursday, Friday, Saturday and Sunday competitions then went through to the grand finale that took place right on the 18th green shortly after Tommy Fleetwood had holed his winning putt, and in front of thousands of cheering fans, all of which was commentated on live by Dale Hayes.

The competition added immeasurably to the overall drive to make the 2019 Nedbank Golf Challenge the most interactive in history.

The Public Hospitality Village was re-envisioned to become an even greater hub of entertainment and, for the first time, was a completely cashless environment as spectators were issued with their own unique tournament payment card powered by Nedbank, and with severla top-up points on site.

A “floating” stage was constructed over the Soho hotel pool and flanked with two big screens to showcase the golf and live entertainment on each of the tournament days after play.

The food and beverage option included the new Beefeater Gin Garden as well as the SunBar, a Nespresso Coffee Bar, and an Amarula pop-up bar to cater to every taste.

Thursday to Sunday saw live entertainment every day after play, including top acts such as the internationally acclaimed Locnville and DJ Euphonik.

This year there was also a great focus on involving the local community in the success of the Nedbank Golf Challenge through partnerships with local artists and entrepreneurs.

Over the past few years the Nedbank Golf Challenge has already transformed its procurement criteria to include a 40% local eligible spend on procurement for “Africa’s Major”.

This year the community involvement was taken further with the introduction of “yarn bombing” and “bird art” as exciting new creative elements for the tournament.

“Yarn Bombing” is the action of covering objects or structures in public places with decorative knitted or crocheted material as a form of street art. It was a grounbreaking new concept for a major golf tournament, bringing the visual power of “crochet graffiti” to golf but in a way that is far more sensitive to the environment.

The other creative element around this year’s tournament included works by the local artist Isaac Jaycee Motau who specialises in recycling old tyres and repurposes them into flowerpots, hanging baskets for plants, bird or animal feeders, and swings for kids’ playgrounds.

For the 2019 Nedbank Golf Challenge he created 12 iconic birds as décor, while his flowerpot and hanging basket creations will be used to bring colour to the overall look and feel of the event.

The scale of the Nedbank Golf Challenge as an entertainment spectacle is reflected in the infrastructure required to deliver “Africa’s Major”.

A total of 3 kilometres of picket fencing is used around the entire event, as well as 13 kilometres of green shade netting, 20 kilometres of fibre cabling, 14 327 square metres of marquee infrastructure, 514 000 cable ties, 1 400 tonnes of scaffolding, and 230 litres of paint.

And there are elements about this tournament that distinguish it as totally unique in world golf.

The sheer size of the Nedbank Chairman’s Deck raised and built in and amongst the trees around the Gary Player Country Club clubhouse is an entirely unique space in tournament golf, giving a true feeling of Africa while watching the golf.

And the first-tee experience is unlike any other in the game. The South African golf personality Dale Hayes is on the tee from the first tee-off until the last each morning introducing the players, welcoming the VIPs and entertaining the crowds with his popular sense of humour.

Gary Player is also a regular visitor to the first tee where he will watch each group tee off and be there to shake their hands or join Hayes on the tee box telling an array of great stories for the spectators to enjoy between groups.

The Nedbank Golf Challenge remains an experience unlike any other in world golf.

It is indeed a true #StrokeofGenius within the game of golf.