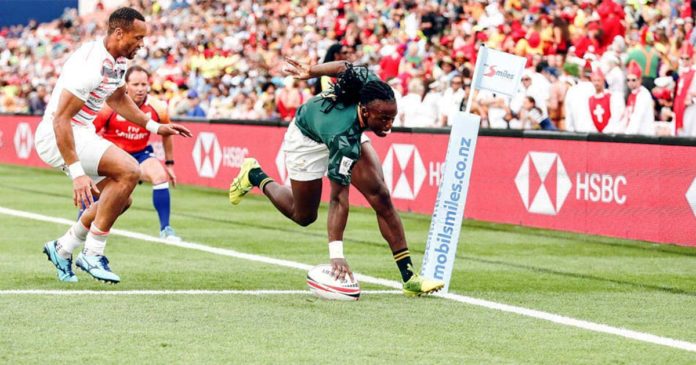 If it depended on the size of his smile, Seabelo Senatla would have had to pay for oversize luggage when the Blitzboks boarded a flight to London on Monday for this weekend’s Athlete’s Factory Sevens in Chester.

The leading Springbok Sevens try-scorer of all time was on tour with the Blitzboks again – for the first time in 16 months – and was clearly itching to get going with the team that he represented 41 times in various tournaments since 2013.

The tournament on Friday and Saturday might seem as a once-off warm-up event against an interesting mix of opponents, but for the former World Rugby Sevens Player of the Year, this is serious business.

“There will be a couple of objectives for me personally; one is to dust off the rust a bit, so to speak, and get some oil in the machine,” Senatla smiled.

“This is a first step back into sevens for a number of us and we are all pretty excited as the countdown begins for the opening tournaments in Dubai and Cape Town in the HSBC World Rugby Sevens Series.”

Senatla is joined by other ‘former’ teammates who played fifteens in recent months, and the winger said it is good to be on the same side again with Rosko Specman and Dylan Sage, whom he opposed playing for DHL Stormers against the Vodacom Bulls.

“It’s great to have them around me for sure,” said Senatla.

“There are also a number of younger guys who impressed me immensely watching them play for the team on telly last season and I am keen to play a match with them as well. Overall, you will see my smile a lot this weekend, despite the fact that is it going to be tough on the body.”

The Blitzboks will face England, Spain and Hong Kong on Friday, and an invitational side, the Jesters, on Saturday morning in Pool B of the tournament. Pool A consists of Ireland, USA, France, Jamaica and Nigeria.