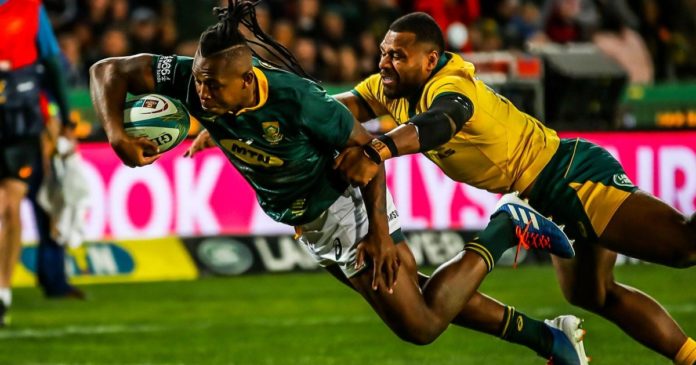 The Springboks will depart for Australia on Thursday, where their four remaining Castle Lager Rugby Championship matches which will be hosted in Queensland following the announcement of the new match schedule by tournament organisers SANZAAR.

The ongoing impact of the COVID-19 pandemic and the subsequent tightening of regulations placed on travel and quarantine by various state and national governments due to the latest outbreaks of COVID-19 in Australia and New Zealand forced a drastic change in the match schedule, which will now see the remaining four rounds of the competition playing out in Gold Coast, Brisbane and Townsville.

The Springboks will kick off the away leg of their campaign against Australia on Sunday, 12 September, at the CBUS Super Stadium in Gold Coast, which will be followed by another match-up between the teams at the Suncorp Stadium in Brisbane on Saturday, 18 September.

These fixtures will be followed by back-to-back matches against New Zealand on Saturday, 25 September at QLD Country Bank Stadium in Townsville and Saturday, 2 October, at the CBUS Super Stadium in Gold Coast.

The matches were initially scheduled to be hosted in Sydney, Brisbane, Dunedin and Auckland respectively.

Each round will feature a double-header of matches between the four participating teams at the same venue, and fans will be allowed to attend the matches

“We are pleased that the Castle Lager Rugby Championship match schedule has been finalised and we are looking forward to continuing our campaign in Australia,” said Springbok coach Jacques Nienaber.

“We can now continue our planning to ensure that the players are ready for the next four matches from a physical and mental point of view, and we are excited about facing our old foes Australia and New Zealand again after kicking off the tournament well against Argentina.”

The Springboks and Pumas will travel to Australia together on Thursday afternoon, and both teams will be placed in quarantine for two weeks before taking the field, after which they will then operate normally in Australia with no restrictions being placed on their movements.

Despite being in quarantine, the Boks will be allowed to train as they have been in South Africa since the start of the Castle Lager Lions Series.

“The two-week quarantine period means we will be on tour for just under six weeks, but we are looking forward to experiencing normal life after a year-and-a-half of living under several forms of adjusted COVID-19 restrictions in South Africa,” said Nienaber.

“This will certainly assist in ensuring that the players are fresh mentally when they take the field, which is essential for them to peak in form.”

The Springboks had Monday and Tuesday off to rest and recover from the physically and mentally taxing schedule in the last two months, which saw them take on Georgia, the British & Irish Lions and play two matches against Argentina.

* All kick-off times and match order to be confirmed