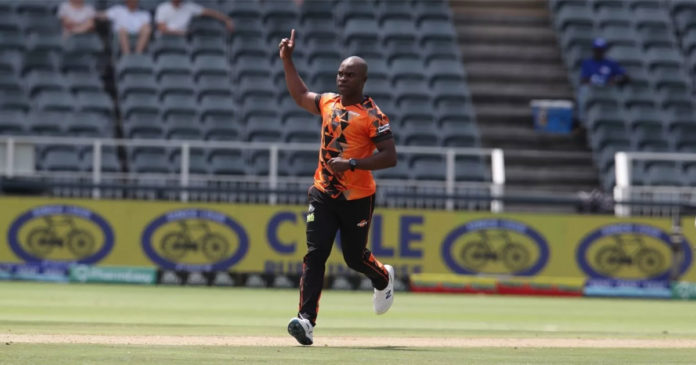 The hosts, who bar the opening game have been extremely poor this season, again showed no signs of that woeful form letting up as they were emphatically dismissed for 108 after winning the toss and batting at the Imperial Wanderers Stadium.

Ben Dunk then slammed an unbeaten 50 off 30 balls (4 fours, 4 sixes) as the visitors raced to their target in just 9.1 overs – claiming a bonus point in the process.

It meant the Stars had now been beaten twice by the Cape Town Blitz and twice by the Giants to sit rock bottom and pointless after four rounds of action.

The Giants, meanwhile, soared to the top of the table after an outstanding display on the Highveld. Led by their quicks Dala, Chris Morris and Nandre Burger, they were clinical from the outset as they blew away the Stars’ top order inside the first five overs.

The dependable Reeza Hendricks edged Morris (1/14) behind for six, before Man-of-the-Match Dala cleaned up the out-of-sorts Chris Gayle for 11.

Sinethemba Qeshile managed to reach 14, before he was bowled by Tahir, who also accounted for Simon Harmer (6) and Gerald Coetzee (1) to finish with figures of three for 23 in four overs.

At the same time, Dala was plugging away at the other end, with his other two wickets including Kagiso Rabada (1) and the Stars captain Temba Bavuma for a top score of 27 – Donovan Miller’s side all out in 18.5 overs.

The Standard Bank Proteas fast bowler finished with three for 19.

The response was an emphatic one by the Giants and lasted less than half the permitted overs.

World Cup-winner Jason Roy crunched 31 off 12 balls, including four fours and two sixes, in a stand of 52 in four overs, before Dunk and Jon-Jon Smuts (23 off 14 balls) completed the humiliation for the Stars.