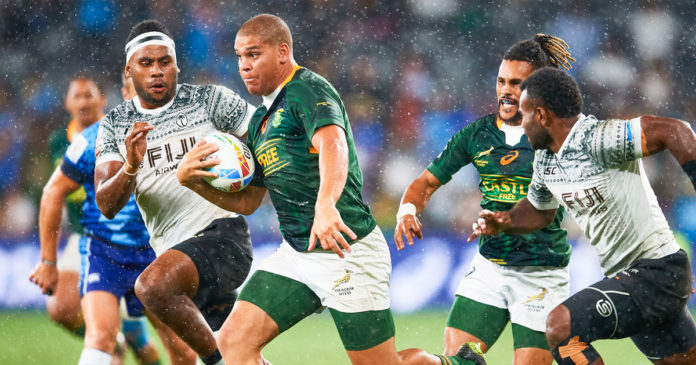 The Springbok Sevens team on Sunday closed the gap on New Zealand in the HSBC World Rugby Sevens Series log and consolidated second spot after suffering an agonizing 12-10 defeat to Fiji in the final of the HSBC Sydney Sevens.

The Kiwi side are still top of the log with 76 points after four tournaments, with South Africa nine points behind on 67. France (56), who started the weekend in joint-second spot with South Africa, dropped to third, followed by England (54), Fiji (53) and USA (47).

The final was played in a downpour at Bankwest Stadium and this resulted in a tight affair which saw Fiji scoring twice in the first half.  After Fiji scored an early converted try, JC Pretorius responded to cut the lead to just two points.

Fiji extended the lead with a well-worked move from a line-out to lead 12-5 at the break.

Zain Davids scored out wide late in the second half, but that still left the Blitzboks two points short and hard as they tried, the final scoring act did not come, and Fiji could celebrate.

Earlier in the day, South Africa qualified for the final by beating USA 19-12 and dominating Samoa 32-0 (match reports here).

The performance of the Blitzboks proved a huge improvement from last weekend and coach Neil Powell expressed his satisfaction with the overall effort, but said the result in the final is hurting.

“That one hurts a bit, because we did not sustain the excellent form we displayed in the first four matches of the tournament. We had some basics letting us down in the final and that was disappointing. We paid the price, unfortunately.”

Powell paid credit to Fiji: “I thought we had control of the match till the end, but Fiji exploited our mistakes and they won. Our guys really deserve credit though with their effort this week. The final will be a negative, but there are so many positives for us from this weekend,” the coach pointed out.

“We will be going into the next tournament with some confidence and momentum and that is a good thing.”

Blitzboks captain, Stedman Gans, said the mistakes in the final will be remembered.

“We did improve a lot from last weekend and the way we improved was very positive. The final was a let-down though and we will have to look at ourselves again, because we lost due to our mistakes. As a squad, we are improving though and I think we are on the up, which is a good thing.”

The Blitzboks will return to their home base in Stellenbosch on Monday evening.

The next tournament of the World Series will be played in Los Angeles on 29 February and 1 March, followed by Vancouver a week later.