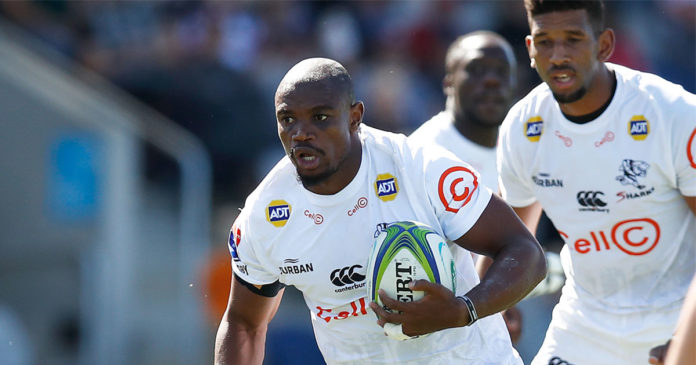 The DHL Stormers continued with their winning streak and are now four games unbeaten following their hard-fought 17-7 Vodacom Super Rugby win over the Jaguares on Saturday in Cape Town. The Cell C Sharks defeated the Rebels 36-24 in Ballarat for a second win on their Australasian tour.

However, the Vodacom Bulls are still winless after they suffered a heart-breaking 23-21 loss to the Blues in Pretoria, while the Emirates Lions had a bye.

The DHL Stormers increased their league tally to 17 for a five-point lead over the Cell C Sharks on the South African Conference log table. The Jaguares slipped to third place (10) and they are followed by the Emirates Lions (5) and Vodacom Bulls (0).

Springbok wing Makazole Mapimpi gave a sparkling display and scored two tries as he helped the Cell C Sharks to splendid 36-24 triumph over the Rebels on Saturday morning (SA time) in Ballarat.

The Durban side led 22-10 at halftime and despite playing with 13 men at one stage in the second half, they still managed to score a convincing win over the Melbourne outfit for a second success Down Under. Hooker Kerron van Vuuren (dangerous tackle) and wing Madosh Tambwe (repeated team offence) were the visiting players who spent time in the sin bin.

The DHL Stormers clinched their fourth consecutive Vodacom Super Rugby win of the season on Saturday afternoon as they defeated the Jaguares 17-7 at a damp DHL Newlands Stadium.

Springbok Damian Willemse (flyhalf) scored the only points of the first half compliments of a penalty goal which gave the hosts a slender 3-0 lead at the break.

The first half saw a huge forward tussle between the two teams, however, the second half erupted into action when the DHL Stormers scored two tries in quick succession. Springbok scrumhalf Herschel Jantjies showed his pace as he raced away for a try under the posts, while midfielder Ruhan Nel – who was last week’s try scoring hero in Johannesburg – found a gap in the visitors’ defence to dive over for the second try.

A late penalty goal by Blues flyhalf Otere Black secured the Kiwi-side a last-gasp 23-21 victory against the Vodacom Bulls at Loftus Versfeld on Saturday evening, keeping the home side winless in the competition.

The men from Pretoria held a 11-8 lead at the break and led by a single point with minutes to go before conceding a costly penalty, which allowed the visitors to snatch victory from their grasp. The defeat marked the Vodacom Bulls’ third loss in as many games, and as a result they are rooted at the foot of the South African Conference standings.

The weekend’s other Round 4 results: