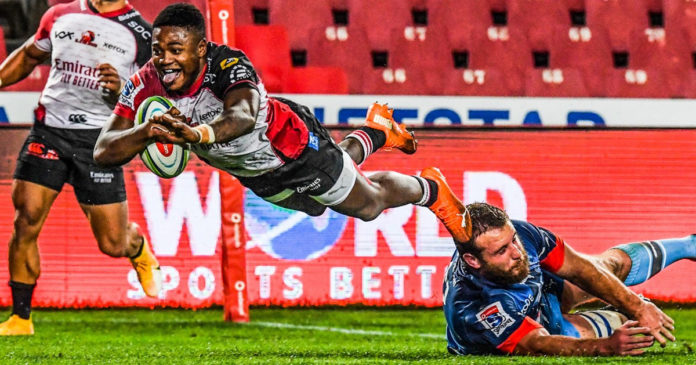 The Cell C Sharks and DHL Stormers recorded much-needed victories to remain in contention on the log with Vodacom Super Rugby Unlocked moving into the final straight, while the Vodacom Bulls held onto their position at the top of the log.

Action in the fifth round kicked off in Durban on Friday evening, with the Cell C Sharks edging the Toyota Cheetahs by 19-13 in a match that burst into life in the final quarter.

On Saturday afternoon in Kimberley, the DHL Stormers made a big statement as they moved into second position on the log with an emphatic 39-6 win over Tafel Lager Griquas.

And in the final match of the weekend, the Vodacom Bulls had to dig deep to beat the Emirates Lions by 30-25 in a tough Jukskei Derby in Johannesburg, with both teams scoring three tries each.

After five rounds, the Vodacom Bulls are still at the top of the log on 19 points, with one match remaining, in two weeks’ time against the Phakisa Pumas, who had a bye this weekend.

The men from Pretoria are followed by the DHL Stormers and Cell C Sharks (both on 13 points, but with two matches remaining), the Toyota Cheetahs (12), Emirates Lions (10), Phakisa Pumas (5) and Tafel Lager Griquas (2).

Curwin Bosch remained calm and collected under extreme pressure in the dying minutes of the Cell C Sharks’ Vodacom Super Rugby Unlocked clash against the Toyota Cheetahs at Jonsson Kings Park in Durban on Friday night to seal a 19-13 win for the hosts.

The Springbok flyhalf kicked four penalty goals and a conversion for a personal tally of 14 points, while he also created the team’s vital try with a little over two minutes left on the clock, which saw them overturn a deficit to earn back-to-back victories in the competition.

Both teams battled to make their presence felt in an error-ridden first half, which saw only six points being scored compliments of two penalty goals by Bosch.

The match livened up in the second half, but the last 13 minutes proved to be crucial as the Toyota Cheetahs took the lead before being reduced to 14 men, which saw the momentum switch in the home team’s favour.

The DHL Stormers delivered a superb second half performance in their Vodacom Super Rugby Unlocked encounter against Tafel Lager Griquas in Kimberley on Saturday to outplay the hosts 39-6.

The Capetonians dominated possession in the first half and capitalised on it to score two tries – one of which was converted – and a penalty goal for a handy 15-3 lead, and they built on this with four second half tries for a commanding victory.

The home side, in turn, battled to make their presence felt from the outset despite a concerted effort to penetrate the DHL Stormers defence in the first half, and this showed on the scoreboard with their efforts earning them only two penalty goals.

Vodacom Bulls come out on top in cracking Joburg arm-wrestle

The Vodacom Bulls put in a massive second half shift to consolidate their position at the top of the Vodacom Super Rugby Unlocked standings by defeating the Emirates Lions by 30-25 in a cracking Jukskei Derby on Saturday evening.

The home team led by 15-10 at the break, but the men from Pretoria took control in the second half to secure their fourth victory of the competition, with the two packs drilling each other for 80 tough minutes. The Emirates Lions were dominant in the scrums, while the Vodacom Bulls had the upper hand in the lineouts.

But the Johannesburgers’ discipline let them down and they were under pressure for most of the match as they conceded too many penalties and struggled under a barrage of high balls from the visitors.

On the other hand, the Vodacom Bulls played with a bit more composure and had the better of the collisions, while Morne Steyn (flyhalf) kept the scoreboard ticking over with a flawless kicking display as he landed all six of his efforts at goal.