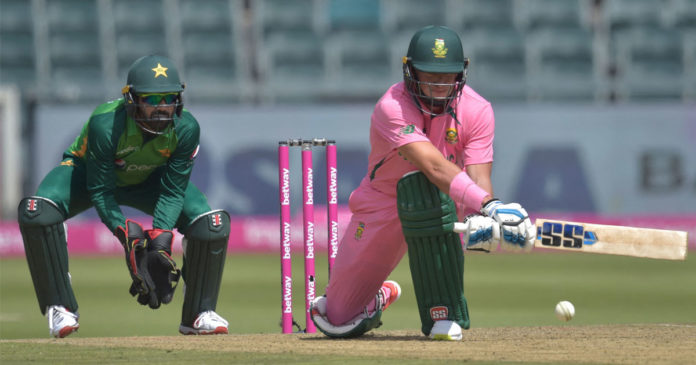 Half-centuries by Quinton de Kock, Temba Bavuma, Rassie van der Dussen and David Miller helped the Proteas draw level at 1-1 in their three-match series against Pakistan after winning the Betway Pink One-Day International by 17 runs in Johannesburg on Sunday.

However, victory did not come without drama after a devasting 193 by Fakhar Zaman threatened all the way for the tourists until he was finally run-out in the final over in a chase of 342 at the Imperial Wanderers Stadium.

The opener plundered 10 sixes and 18 fours in a 155-ball assault – a fixture record between the sides and the highest individual score at the venue, beating the 175 by Herschelle Gibbs in the famous 438 match of 2006.

South Africa had earlier produced a fine all-round batting performance, which was lead by their top-scoring captain, Bavuma, who struck 92 off 102 balls (9 fours).

Opener De Kock returned to form at the top of the order with 80 (86 balls, 10 fours, 1 six), while Van der Dussen continued his scintillating form from match one where he scored a century, by blasting 60 off 37 balls (6 fours, 4 sixes).

David Miller then provided the final flourish with an unbeaten 50 off 27 balls (3 fours, 3 sixes) – the hosts amassing 341 for six after losing the toss and being asked to bat first.

Pakistan then fell into huge trouble in their reply after slumping to 120 for five, before Fakhar kept the South Africans on their toes until he finally fell.

The result means the series will now be decided when the final match is played in Centurion on Wednesday.

A fixture that is usually amongst the country’s sporting highlights did not feel the same without fans at the Bullring, but nonetheless produced fine cricket between two evenly-matched sides.

De Kock and Aiden Markram (39) put on 55 for the opening wicket, with the former then adding 114 for the next wicket alongside Bavuma.

A further 101 followed between the skipper and Van der Dussen, before Miller exploded at the death to help the hosts post their third-highest score against the Asian side. Haris Rauf was the pick of the bowlers with three for 54.

Pakistan only really looked a threat when Fakhar and captain Babar Azam (31) were going early on when they reached 70 for one in the 11th over.

Anrich Nortje (3/63) subsequently claimed three wickets to leave then suddenly reeling at 85 for four, before more trouble followed when Shadab Khan was dismissed by Tabraiz Shamsi (1/60) for 13.

Asif Ali (19) initially helped revive things with a 66-run sixth-wicket stand, but two more quick wickets appeared to put the Pakistanis on the brink on 205 for seven.

But Fakhar had other ideas from there, farming the strike in stands of 68 with Shaheen Shah Afridi (5) and 39 for the ninth wicket with Haris. The star man finally fell when he was run-out by a direct Markram hit at the start of the final over when 32 were needed, handing the Proteas victory.