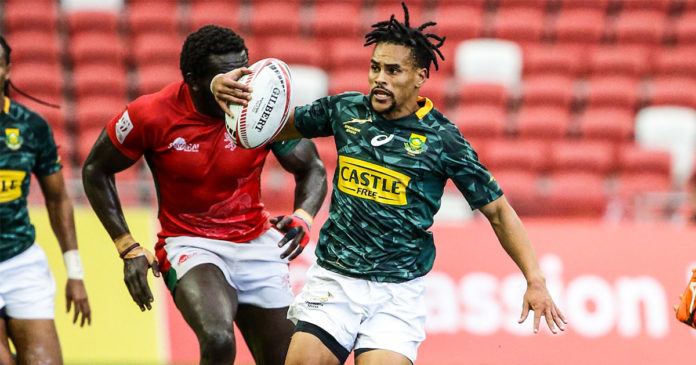 The Springbok Sevens squad regrouped in Stellenbosch this week after their season was interrupted by the COVID-19 pandemic, and according to coach Neil Powell, they have placed the Tokyo Olympics as their ultimate goal.

Powell said the Tokyo Games, penciled in from 23 July to 8 August, 2021, remains an important date in the team’s calendar.

The postponed world showpiece was set to wrap up the 2019/2020 season for the South Africans, but it fell way along with the final four tournaments of the HSBC World Rugby Sevens Series due the COVID-19 pandemic. The Blitzboks were handed silver medals for their second-place finish behind New Zealand following the completion of six tournaments.

“We would have returned from the Olympics a few days ago if it had not been postponed, so it’s easy to remind ourselves that it’s unfinished business,” the coach explained in terms of his thinking for the new season.

“We have again penciled that in as part of the planning for the next season, as that is one of the few confirmed dates available. One thing we have on our side for now is time, and we restarted this week with that in mind.”

Springbok Sevens captain, Siviwe Soyizwapi, said the return of so many familiar faces was a boost to the whole squad. The players on Tuesday were tested in line with a number of return-to-training protocols, while the team’s medical staff also assessed the players’ physical and mental well-being. The strength and conditioning element of training started on Wednesday.

“It is really good to see team mates again, although some only from a distance,” said Soyizwapi. The Blitzboks are – as per guidelines – working in groups of five and will continue to do so while the RTT protocols are in place.

“We are adhering to the relevant guidelines and social distancing, and we all realise the importance of staying healthy in these opening weeks and making sure we do our bit with regards to the protocols.

“There is some time to go before we will play our first match, but just to be back with the group and to start training again is a wonderful opportunity for us to get the season going,” Soyizwapi said.