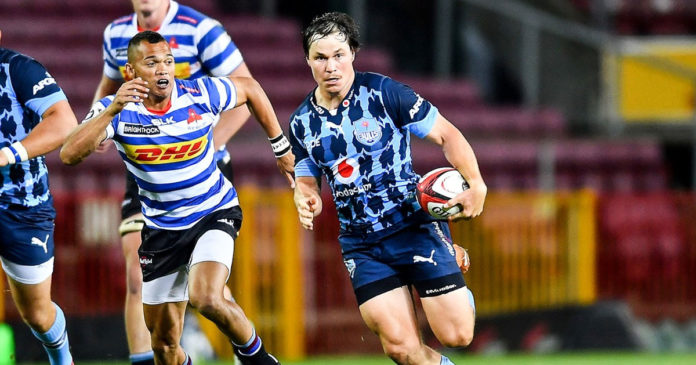 Despite playing with only fourteen men in the second half, the Vodacom Bulls managed to snatch a last-gasp 22-20 win over the DHL Western Province in their entertaining Carling Currie Cup Round One match played on Saturday evening in Cape Town.

Lightning brought an early end to the clash in Kimberley where the Xerox Lions were awarded the match 20-17 after threatening weather conditions forced players off the field. Law 5.10 of the competition regulations states that the referee has the power to end or suspend the match at any time if he believes that it would be unsafe to continue.

On Friday evening the Cell C Sharks kicked off the weekend’s first-round action at home in Durban and the coastal team comfortably defeated the Phakisa Pumas 45-10, outscoring their Lowveld visitors by seven tries to one. The Toyota Cheetahs had a bye weekend.

The full log table of Vodacom Super Rugby Unlocked was carried over to the Carling Currie Cup, meaning the Vodacom Bulls are leading the current standings with 27 points on the back of their comeback win over DHL WP in Cape Town.

As a result of their bonus-point win over the Phakisa Pumas, the Cell C Sharks occupy second spot on the log with 24 points and they are followed by DHL WP (20), Toyota Cheetahs (17), Xerox Lions (16), Phakisa Pumas (7) and Tafel Lager Griquas (4).

The Vodacom Bulls showed nerves of steel and massive character to defeat the DHL Western Province 22-20 in their North versus South derby played at DHL Newlands on Saturday evening.

The teams scored three tries apiece as the lead changed hands several times, however, it was the crucial kick by visiting fly half Chris Smith – to convert a late try by replacement Marco Jansen van Vuren – that clinched victory for the men from Pretoria.

Jake White’s team showed enormous courage to emerge as winners of this hard-fought derby, considering they had to play almost the entire second half with 14 men as a result of the red card shown to front ranker Jacques van Rooyen.

DHL WP fly half, Damian Willemse, had an erratic night with the boot in windy conditions and he missed several penalty attempts and a couple of conversions.

Juarno Augustus (No 8), Angelo Davids (right wing) and Ernst van Rhyn (No 7 flank) each scored a try for the Cape side, while Willemse managed one conversion and a penalty goal. Kurt-Lee Arendse (right wing, 2) and Marco Jansen van Vuren (replacement wing) responded with tries for the Vodacom Bulls and Smith added two conversions and a penalty goal.

The Cape side enjoyed a 10-5 advantage at the break, having scored a converted try and a penalty goal to the visitors’ unconverted try that opened the scoring. However, the second half burst into thrilling action, with both sides determined to clinch the bragging rights of this traditional rivalry.

Crucially, the lead changed hands one last time time when Smith executed a pinpoint cross-kick to find Van Vuren who dived over in the corner. Smith kept his nerve to slot over the vital conversion to hand his side a memorable win.

Xerox Lions get past Tafel Lager Griquas in weather-affected clash

The Xerox Lions squeezed a hard-fought 20-17 win out over hosts, Tafel Lager Griquas, in their weather-affected match in Kimberley on Saturday.

The team from Jozi were handed the win when an approaching thunderstorm forced the players off the field just five minutes into the second half and when the storm did not subside 30 minutes later, the match was called in favour of the visitors.

Having trailed 17-13 at the break, the Joburg side took the lead just a minute before play was halted even though the home team were on the attack, with the match officer’s safety call coming at the most unfortunate time for the hosts.

The Kimberley outfit must be cursing their luck as they looked set for victory 30 minutes into the first half, with three unanswered tries setting them on their way. The visitors responded decisively though with two late first-half tries and another one just after the restart.

In the opening first-round encounter played on Friday evening in Durban, the Cell C Sharks overpowered the Phakisa Pumas 45-10 by scoring seven tries to one in this comfortable bonus-point victory.

The Durbanites scored five tries and three conversions to go 31-3 up into the break, with their forwards especially dominant, while replacement wing Sbu Nkosi made a dramatic impact in the second half with two further tries to seal a dominant performance.

The home forward pack used their bulk size and mauling abilities to good effect, which set up the platform for all but one of their five first-half tries. They enjoyed territorial advantage and possession and kept the pressure on the visitors by using their heavyweight pack to set up numerous attacking opportunities from their well-functioning lineouts.

Jimmy Stonehouse’s team made a better impact in the second half and managed to carry the ball deep into the home territory. That good work was however undone when Springbok flyer Nkosi, who came on as a replacement, wrapped the game for the coastal team with two very good solo tries.

The Carling Currie Cup champion will be the team that wins the final on 23 January 2021 – the top four teams on the log will progress to the semi-finals (the top-placed will host the team that finishes fourth and the second placed team, the team finishes third), with the final hosted by the winning semi-finalist who finished highest on the log.

In the event of two or more teams being equal on log points for any position on the standings, either during or at the end of the season, such position will be decided upon using the following steps until the tie is broken: