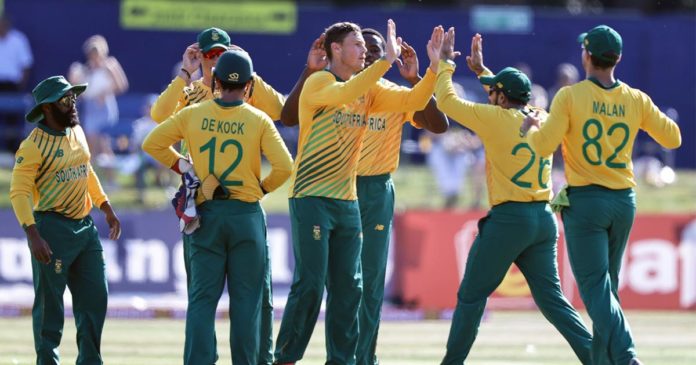 Cricket South Africa (CSA) has congratulated the Proteas on winning the T20 International Series against Ireland following their victory by 42 runs in the second match at the Civil Service Club in Stormont, Belfast on Thursday evening.

It gives them a 2-0 lead in the three-match series with the final game of the tour to be played at the same venue on Saturday evening.

“Congratulations to captain Temba Bavuma, head coach Mark Boucher and all the players and support staff on what has been, by and large, a successful tour,” commented CSA Acting Chief Executive Pholetsi Moseki.

“Special mention must be made of our No. 1 ranked bowler in this format, Tabraiz Shamsi, who is the leading wicket-taker in T20 International cricket in the current calendar year.

“The priority is to get the Proteas battle hardened and ready for the immediate challenge that awaits them at the ICC T20 World Cup towards the end of the year and, by winning successive away series against world champions, the West Indies, as well as Ireland, they have provided a good indication that they are on the right track.

“A lot of their matches have been very tight affairs and it has been encouraging to see their ability to get over the line in pressure situations.

“They have also shown great resilience in dealing with difficult off-the-field issues such as living in a bio-bubble for almost two months, including undergoing two sets of quarantines, and the unfortunate outbreak of violence at home that affected team members personally. It is always difficult to be away from your loved ones at such times.

“The very fact that they have to date not recorded a single virus infection while they have been away reflects very positively on their discipline in abiding by pandemic protocols and on the excellent support and advice being provided by our medical personnel to whom we also extend our gratitude.

“It is absolutely vital that we keep international cricket thriving in these difficult times,” concluded Mr Moseki.