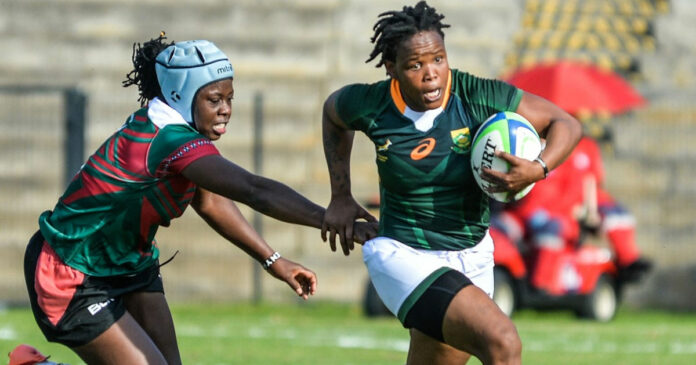 Springbok Women’s Sevens coach Paul Delport opted from some continuity and experience alongside a rash of exciting new talent when he invited 14 players to their third conditioning camp of the season, to be held at Stellenbosch Academy of Sport from 11-17 March.

The monthly camps at SAS comes after the re-ignition of the Springbok Women’s Sevens programme, with the team’s last tournament – the HSBC Cape Town Sevens in 2019 – now all but a distant memory.

With their first tournament of the new season will be the Rugby Africa Sevens in Tunisia at the end of April, the Springbok Women’s Sevens team are starting to fine tune their efforts as they prepare for the best on the continent, where victory will also result in qualification to play in the Commonwealth Games.

Where the first two camps, in January and February, were aimed at re-introducing the players to rugby sevens principles and fitness, this time around – the second last camp before departure to North Africa – they will play in a number of matches to sharpen minds and bodies.

Delport – boosted by the news that the team received and accepted an invitation to the HSBC France Sevens in Toulouse in May – also called on six players with Test experience to potentially become dual code internationals. Ayanda Malinga, Lerato Makua, Donelle Snyders, Alichia Arries, Felicia Jacobs and Simamkele Namba will be hoping to crack the nod in the shorter version of the game as well.

Malinga made her Springbok debut in 2019, but the remaining five all earned Test caps last year, with Makua and Namba coming off the bench against Wales in November in their debuts, confirming good recent form.

Namba is amongst a group of players who remains involved in the Springbok Women’s Rugby World Cup preparations, but for the wing, moving between the codes is no problem.

“No problem at all; in fact, I prefer it like that,” said Namba, who will celebrate her 24thbirthday in New Zealand if she makes it to the global showpiece in October.

“Each of the two versions of the game require certain skills, but also poses different challenges and I like that, as it forces me to improve myself. I love the space that the sevens code brings, but also enjoy the physicality that comes with the fifteens game.

“Ultimately, I want to become the best player I can be and each of the two camps improve me in different ways, so it is a win-win for me.”

Namba scored seven tries in 10 matches for DHL Western Province in the 2021 Women’s Premier Division and forced her way into the Springbok Women’s squad for their November tour of Europe. Although she has fond memories of making her debut against Wales in Cardiff and playing at Twickenham against the Barbarians, she is also very keen to become a dual international in Tunisia.

“It is a nice group of players and with a number of tournaments lined up, including of course the Rugby World Cup Sevens in Cape Town, I am keen to make this team,” she said.

“We will work hard this coming week and when the fifteens camp comes around next weekend, I will use the experience and fitness to my benefit on that side as well.”

The squad will play a number of matches against Boland and Western Province on Saturday at Markötter Stadium in Stellenbosch.