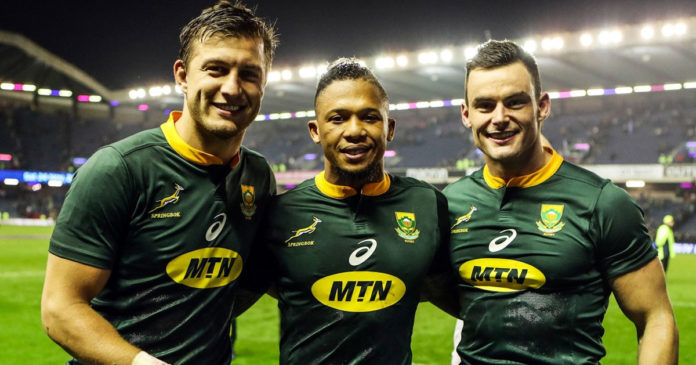 The Springboks will travel to Edinburgh to face Scotland on 13 November 2021 as one of their end-of-year Tests in Europe next year, it was confirmed on Tuesday.

Scotland are set to host the reigning Rugby World Cup champions at BT Murrayfield, where the hosts will try and break an 11-year win drought against the South Africans.

The last time the Springboks lost to Scotland was by 21-17 at BT Murrayfield on 20 October 2010, with Dan Parks kicking all their points. Since then, the South Africans have won six on the trot against the Scots, including a RWC pool match England in 2015, and three Tests in Edinburgh.

In their last meeting in 2018, the Boks edged the match 26-20 mainly due to superior goal-kicking after both sides scored two tries apiece. Handré Pollard – one of the try scorers with Jesse Kriel the other – added two conversions and three penalty goals, while Elton Jantjies slotted the remaining penalty goal.

The Boks are set play the Scots as one of three internationals in Europe, with the other matches scheduled for 6 and 20 November 2021. The identity of the other two opponents on the traditional November tour will be confirmed in due course.

The Scottish Rugby Union have launched their tickets for next year’s big international meeting with the world champions and the encounter is expected to attract a sell-out crowd. Tickets for the match go on sale on scottishrugby.org this week.

Rassie Erasmus, Director of Rugby, said the Springboks can expect another very tough match on their return to BT Murrayfield next year.

“Scotland have established themselves as a very tough and difficult side to beat,” said Erasmus.

“Our last meeting two years ago went down to the wire and they will definitely be another huge threat, especially playing at home in front of a passionate Scottish crowd.”

Erasmus added that the Springboks will have to be at their very best to combat their hosts in the Northern Hemisphere in 2021: “Next year’s Tests will be the first time in three years the Springboks return to Europe, where the intense rivalry against tough opponents in different weather conditions will make for some very interesting Test match battles.”

The Springboks didn’t tour in Europe last year due to the Rugby World Cup in Japan, while their annual northern hemisphere trip was cancelled this year because of the COVID-19 pandemic, which unfortunately resulted in no international action at all for the national team.

All the fixtures of the Springboks’ 2021 end-of-year tour will be confirmed in due course.