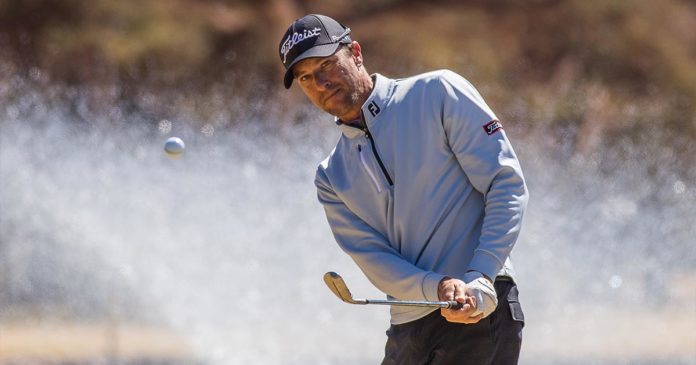 Bloemfontein professional Alex Haindl claimed his second victory in three months when he won the Vodacom Origins of Golf in a thrilling final round at Sishen Golf Club on Saturday.

Haindl closed with a level-par 72 to win on three under par, one stroke clear of Peter Karmis, Hennie Otto, Ockie Strydom and Jayden Schaper.

It’s his second victory on the Vodacom Origins of Golf Series after a win in 2018, the fifth of his Sunshine Tour career and, most importantly, his second this year.

“It feels great. It’s always great to win and to feel like you’re getting the reward for the hard work you’re putting in,” he said.

It was a dramatic final round with more twists and turns than an underground mineshaft in this mining town. Haindl’s winning total was one of the highest in the history of the Vodacom Origins of Golf series, coming close to Steve Basson’s 54-hole total of one under that won him the final of the series in 2005.

“I’ve never been the biggest fan of tournaments that are just putting competitions. I like the tougher golf courses,” said Haindl.

The field was certainly given a challenge on the final day.

Schaper shared the lead with Strydom going into a final round of bitterly cold temperatures. Hennie O’Kennedy then emerged as the immediate threat and was leading before a triple bogey seven on the 18th cost him the title. Strydom fell off the pace with a final round of 75. Schaper struggled with an outward nine of 40 and then found form and shared the lead with Haindl after three consecutive birdies on the back nine, but saw his title hopes dashed by a bogey on the last.

“It was very tricky out there,” said Haindl. “I tried to just focus on my own game and told myself that whatever the others did I had no control over.”