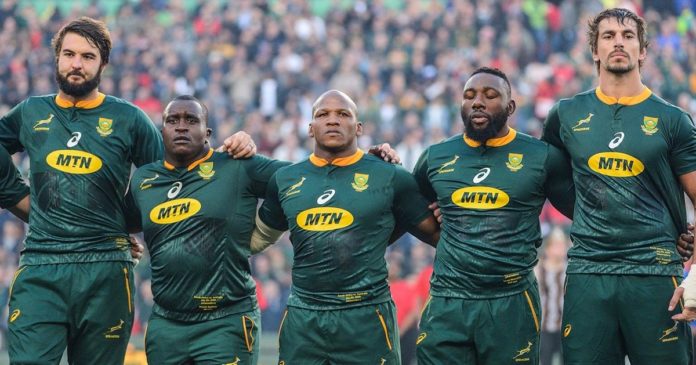 MTN has renewed its headline sponsorship of the world champion Springboks, with the multinational mobile telecommunications giant also confirmed as a principal partner for the eagerly awaited Castle Lager Lions Series, SA Rugby announced on Wednesday.

The renewal was negotiated for a five-year period and extends into 2025, supporting the ongoing effort to rugby enhance development and transformation in South Africa.

MTN took over as Springbok headline sponsor prior to the 2017 international season, a period during which both embarked on a journey of transformation that culminated in the Springboks becoming word champions in 2019.

“Confirming the renewal of our partnership with MTN is massive for SA Rugby and we are thrilled to continue on this road with them,” said Jurie Roux, CEO of SA Rugby.

“When we named MTN as our new headline sponsor four years ago, we realized that it represented a pivotal moment for SA Rugby and that welcoming a company of MTN’s size and reach was a significant moment for the sport.

“They have been a wonderfully supportive partner during a time of regeneration for the Springboks and the wider South African rugby fraternity, and have stuck with us through the pandemic. We are excited to continue to have MTN by our side.

“For MTN, it was never only about having their logo on the front of the Springboks’ jerseys. They wanted a powerful partnership and that is exactly what we have established in the last four years.

“When they came on board, rugby was in a precarious position, but they understood where we were headed and what we wanted to achieve, to inspire the nation, and as one of South Africa’s success stories in the last three decades, MTN fully supported us in that.”

Mapula Bodibe, Chief Consumer Officer for MTN SA, said: “We found it fitting to continue to back the Springboks following a very successful period during which they became the World Champions, warming the hearts of our nation.

“Sports fans have had to endure a frustrating year. Teams and their supporters were left with very little to cheer about due to COVID-19, but we are finally getting to the stage where our team is preparing to take to the field again and unite our nation as only they can.

“We are delighted to renew our headline sponsorship just ahead of the important Lions tour in July, providing the Springboks and South African rugby with the necessary support to grow well into the future, while also offering our fans great digital platforms to enjoy their love of the game, especially as they can’t be in the stadiums,” she added.

MTN also announced that fans can look forward to being rewarded over the coming months with plenty of unique experiences, exciting new prizes and competitions, including a daily mobile Bok Trivia quiz in which MTN customers can test their Springbok rugby knowledge and stand a chance to win R100,000 every week.

“To celebrate the sponsorship and to bring the joy of rugby back for supporters, lifting spirits where we can, a total of R50m in prizes will be given away over the next few months across different MTN platforms,” explained Bodibe.