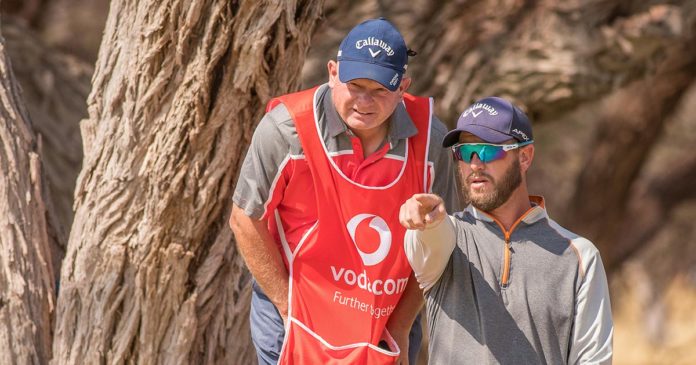 Ockie Strydom describes the Kalahari atmosphere as “good for the soul”, and it’s once again proved good for his golf game as well. The winner of the last Vodacom Origins of Golf tournament played at Sishen Golf Club also claimed a share of the first-round lead of this year’s tournament on Thursday.

Strydom opened with a two-under-par 70 to share the lead with Rourke van der Spuy. They are one stroke clear of five players, including the talented young duo of Deon Germishuys and Jayden Schaper.

Strydom won the 2019 Vodacom Origins of Golf tournament here. The 2020 series was cancelled as a result of the pandemic. But Strydom says when they returned this week, he felt right at home – literally.

“I’m staying with family of my wife. They have a home right by the 11th tee box on the golf course. It’s just so peaceful. I think that’s what I love about this golf course and this tournament. The atmosphere here in the bush calms me down. You don’t hear any cars or planes or anything. It’s just peaceful and good for the soul.”

There was a moment in his round when Strydom’s peace was disturbed, though, and that came with a double-bogey on the par-three 13th.

“I was irritated with that because I three-putted from six feet. But my caddie told me to just keep being patient because the scores won’t be great. We had quite a bit of wind, and some overnight rain softened the course, so the ball wasn’t running as far on the fairways as it did in the pro-am. So I stayed patient and it paid off,” he said.

The leaderboard is still very bunched up after round one. MJ Viljoen, who as a boy used to come and watch the Sunshine Tour pros in this event before he started competing against them, is alongside the big-hitting James Hart du Preez and a host of others just two shots off the lead. And the tougher conditions should keep the leaderboard tight.

But that’s not troubling Strydom, because he’s in the Kalahari.

“You know, the Sunshine Tour put out a social media post saying I won here in 2019 and who will be next? I answered it with ‘Ockie Strydom’. So, I have a goal. And every night we have a lovely braai here, and nothing beats the smell of camel thorn wood on a braai fire.”