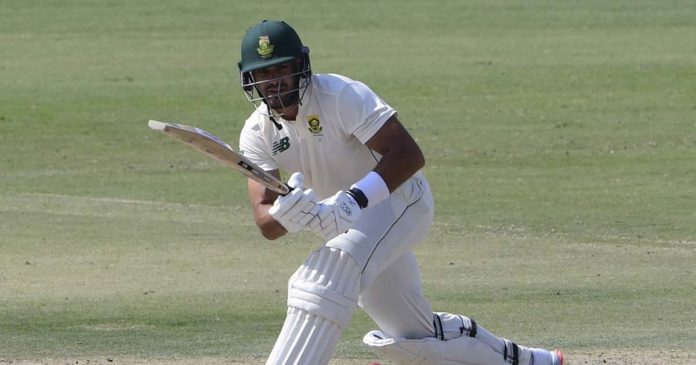 George Linde’s maiden career five-for followed by one of South Africa’s best batting performances of their tour to Pakistan thus far helped them reach stumps on day four of the second Test in an encouraging position in Rawalpindi on Sunday.

Aiden Markram and Rassie van der Dussen were at the heart of the action after sharing in an unbroken 94-run second-wicket partnership that took the Proteas to the close on 127 for one chasing a fourth innings target of 370.

That left them needing a further 243 on the final day with nine wickets still in hand, an excellent position considering what had transpired earlier on the penultimate day when Mohammad Rizwan’s first career century looked to have put the hosts out of sight.

But thanks to Markram’s ninth career 50, the opener was unbeaten on 59 off 131 balls (9 fours, 2 sixes), and van der Dussen’s 48 off 94 balls, the final day promised to be an intriguing one at the Rawalpindi Cricket Stadium where the tourists were looking for a victory that would help them earn a share of the series.

The first half of day four did not go to plan, though, for Mark Boucher’s side as they allowed the last three wickets to more than double the overnight score.

Pakistan had started the morning finely placed on 129 for six and they fell into deeper trouble when Hasan Ali (5) was trapped leg before wicket by Keshav Maharaj (3/118) inside the first six overs.

But from 143 for seven, Rizwan spearheaded a remarkable recovery by first establishing a 53-run eighth-wicket stand with Yasir Shah (23) and then adding 97 alongside Nauman Ali (45) for wicket number nine.

The home wicketkeeper in the process went to three figures and in the end was left stranded on 115 off 204 balls, 15 fours as Linde eventually claimed the last wicket of Shaheen Shah Afridi (4) to end with an impressive return of five for 64 in 26 overs.

That frustrating wagging of the Pakistani tail left the away side with a marathon task ahead of them.

That job became even bigger when Dean Elgar (17) fell chasing a wide Afridi (1/22) delivery leaving South Africa on 33 for one eight overs in.

However, Markram and van der Dussen knuckled down and ensured they chipped away patiently at the 370-run target to give their side cause to believe heading into day five.