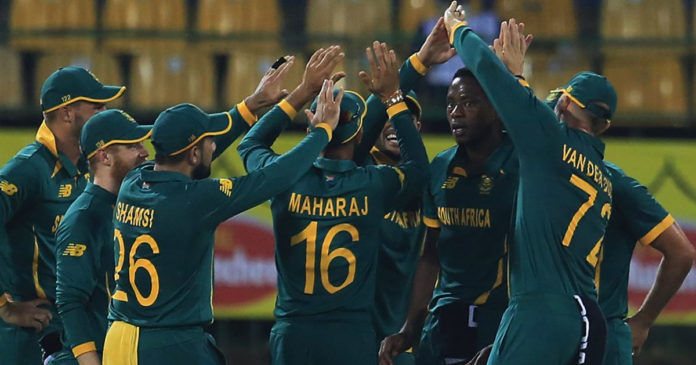 Janneman Malan scored an exceptional, cramp-riddled century, while Tabraiz Shamsi took a maiden international five-wicket haul, to help South Africa to a series-levelling, 67-run victory via the DLS method, over Sri Lanka in the second of the three-match, One-Day International (ODI) series on Saturday.

The match had a little bit of everything, rain delays, centuries, five-fors, cramping and even a late ankle sprain to Kagiso Rabada (2/16 in six overs) which saw him miss out on the latter part of the Sri Lankans’ reply.

Keshav Maharaj won the toss and elected to bat first in his maiden international match as interim captain and his batsmen did not disappoint. After the early loss of Aiden Markram for 21 (29 balls, 1×4, 1×6) in the ninth over, Malan shared an exciting 96-run, second-wicket stand with Reeza Hendricks before the latter departed for a remarkable 51 off 54 deliveries (5x4s).

Rassie van der Dussen chipped in with 16 runs before his dismissal brought Heinrich Klaasen to the crease. The Proteas’ wicketkeeper blasted 43 runs from 27 balls in their 86-run partnership, assisting Malan to 121 off 135 deliveries (9x4s, 1×6) and supporting him through his frequent bouts of cramping, which saw the young opener substituted when it came to the Proteas turn to field.

South Africa finished with 283/6 after their innings was reduced to 47 overs.

Chamika Karunaratne (2/24) and Dushmantha Chameera (2/52) were the pick of the bowlers, taking two wickets each.

Sri Lanka’s own innings was reduced to 41 overs after more rain fell both during the innings break and during their innings and their target was revised to 265.

The home team’s batting reply was missing the aggression of the first match. Rabada and Wiaan Mulder saw off the top three batsmen in the first six overs of the innings. Avishka Fernando (8) and Bhanuka Rajapaksa (0) were toppled in the fifth over by Rabada, followed by Minod Bhanuka (7) to the opening ball of the sixth.

George Linde (1/40) claimed his maiden ODI wicket – Wanindu Hasaranga de Silva for three – on debut and Maharaj (1/32) added the scalp of Chamika Karunaratne (36 off 23) before Shamsi decimated the tail for his five-fer to end the match with a little over four overs to spare.

The series decider will take place on Tuesday, 07 September at the same venue – R. Premadasa International Cricket Stadium – at 14:30 (SLST).