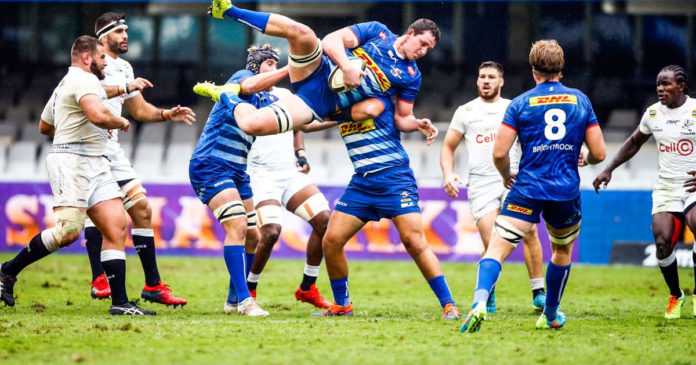 The DHL Stormers clawed their way to a morale-boosting 25-22 victory over the Cell C Sharks in Durban on Saturday on a day that also saw the Emirates Lions shock the Vodacom Bulls 34-33 for their first win of the PRO14 Rainbow Cup SA campaign.

Tim Swiel kicked two late penalty goals to secure a second successive away win for the Cape side, just as he did in the previous round against the Emirates Lions.

After coming close on several occasions, the Emirates Lions managed to bag their first win and hand the Vodacom Bulls their first defeat of the competition.

Both were surprising results – it was the Durbanites’ first defeat in nine games at Jonsson Kings Park, while the men from Pretoria were brought back to ground after a very impressive victory over the Cell C Sharks last weekend.

As a result of Saturday’s surprise outcomes, the DHL Stormers have now jumped into second place on the log thanks to a slightly better points’ difference than the Cell C Sharks, who missed out on an outside chance to go top of the standings.

With two games to go, the Vodacom Bulls have 15 points, and they are followed by the DHL Stormers and Cell C Sharks, on 11 points each, while the Emirates Lions improved their tally to eight points.

Replacement flyhalf Tim Swiel kicked a late penalty goal to hand the DHL Stormers a 25-22 win over the Cell Sharks in their fourth-round PRO14 Rainbow Cup SA match in Durban on Saturday afternoon.

Both sides scored three tries apiece and with the scores tied at 22-22 with just three minutes remaining on the clock, it was up to Swiel to decide the outcome of this closely fought coastal derby.

The DHL Stormers, with Springbok loose forward Pieter-Steph du Toit in imperious form, led 12-10 at the break thanks to a brace of tries from Edwill van der Merwe (wing), and managed to kick on for a closely fought victory over the Durbanites.

“We made the start we wanted but somehow our defence and errors at crucial times let us down,” said Lukhanyo Am, the Cell C Sharks’ captain.

“We struggled at set piece where they managed to put us under pressure. We know the areas we have to improve, but over-all we are moving in a good direction despite the setback of today.”

DHL Stormers skipper Steven Kitshoff thought the home side did well to put them under pressure in the first half and that it required a good effort from his men to topple their hosts.

“They handled our scrum and breakdown very well in that first half hour, but we managed to get some momentum back and I though the guys did well to close out a tight match,” said Kitshoff.

“Pieter-Steph du Toit especially was enormous for us. He is an incredible rugby player, a great leader in the team and his experience played a massive role for us today. We showed great character to bounce back from a couple of tough games at home to win two in a row.”

The Emirates Lions shocked log-leaders the Vodacom Bulls in a tightly contested PRO14 Rainbow Cup SA clash in Johannesburg on Saturday, winning their first game of the campaign by 34-33.

Built on the back of a devastating scrum performance, the men in red managed to weather the blue storm from the north, even though the visitors scored five tries to the hosts’ four on a perfect late autumn afternoon in Johannesburg.

The Vodacom Bulls were brilliant on the deck and forced many turnovers and breakdown penalties, but they failed to convert all their opportunities into points, as the Emirates Lions managed to keep the visitors pinned in their own half at crucial stages of the game.

Both teams were intent on playing attacking rugby and the nine tries scored is testimony to that, but the Gauteng neighbours also defended very well throughout the match.

Emirates Lions skipper Burger Odendaal was understandably a happy man: “It is an awesome feeling, winning at home and defeating the Vodacom Bulls.

“We came so close in the previous rounds and being able to close it out over this strong Bulls team is a great relief, especially after our narrow loss here to the Stormers last weekend,” added Odendaal.

“I told our guys before the match this Lions side is very good at set pieces and we fell into their trap, trying to play their way. They scrummed well and then when it mattered, they managed to see us off at the end,” said Vermeulen.