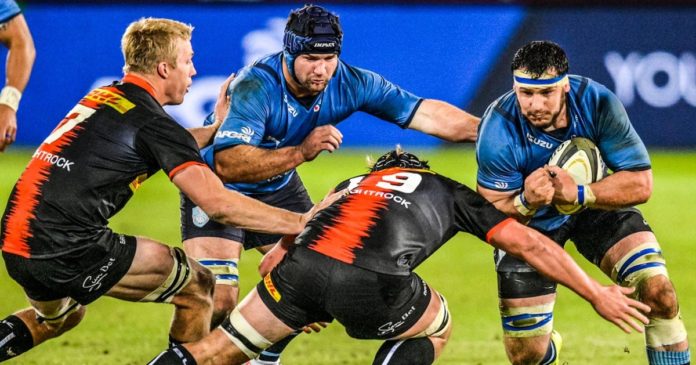 The race to the top of the standings in the PRO14 Rainbow Cup SA will go down to the wire in Durban next weekend when the Cell C Sharks and Vodacom Bulls clash in what is a mini-final for all effective purposes.

With one round to go, the Vodacom Bulls are on 20 points, followed by the Cell C Sharks on 16, the DHL Stormers (13) and the Emirates Lions (8).

The Durbanites opted to rest a number of their first-choice players for their trip to Johannesburg, but the team that ran out at Emirates Airline Park had more than enough fire-power to not only beat the Emirates Lions, but also to reverse a two-match losing streak.

With the Vodacom Bulls sneaking home with a late try against the DHL Stormers in Pretoria on Friday evening, it basically means the Cell C Sharks can still top the log if they can beat the men in blue with a bonus point, and keep their opponents from getting any log points.

The Vodacom Bulls’ positive points’ difference of 54 will come in handy should the teams end up on the same number of log points, while the Cell C Sharks are on -14.

Saturday’s first match is in Cape Town, where the DHL Stormers host the Emirates Lions (16h00), before the action moves to Durban for the clash between the Cell C Sharks and the Vodacom Bulls (18h15).

The Cell C Sharks kept alive their hope to win the PRO14 Rainbow Cup SA with a well-deserved 33-21 win over the Emirates Lions in Johannesburg on Saturday afternoon, setting up a “final” against the Vodacom Bulls in Pretoria next weekend.

The Durbanites, who held a slender 19-14 lead at the break, added two tries to the three scored in the opening half, with the crucial score coming 10 minutes from time when fullback Anthony Volmink scored to push his side into a 12-point lead. That proved decisive in a match determined by small margins and crucial moments.

The most telling was provided by Cell C Sharks replacement flyhalf, Boeta Chamberlain, who created some magic to send Volmink over and stop the home side’s fightback plans.

Both sides came to play and provided a slugfest of action, with a number of fine individual performances as well, most notably that of Springbok wing Makazole Mapimpi, who recently returned to Durban from a stint in Japan and underlined his class in his first match back in the colours of the Cell C Sharks.

Sean Everitt, head coach of the Cell C Sharks, said the victory in Joburg will do wonders for their confidence going into the final round of action.

“We have not lost to the Bulls at home yet this year and when we last met them, at Loftus Versfeld, I thought we were in command for the first 50 minutes before we slumped in the final 20. We are keen to set the record straight, and we know we can do it at home,” said Everitt.

Emirates Lions head coach Ivan van Rooyen said: “We were good enough to win the game and we had enough opportunities to win the game and I think that’s why it hurts so much. The guys really got stuck in there for 80 minutes and I really felt we improved in the second half. We looked desperate and our execution improved and that adds to the frustration.”

Heavily penalised and under massive defensive pressure for most of the match, the DHL Stormers almost clinched a remarkable win at Loftus Versfeld, but in the end a last-minute try by the Vodacom Bulls’ hard-working lock Ruan Nortje ensured they kept their grip firmly at the top of the PRO14 Rainbow Cup SA log with a nail-biting 31-27 victory in Pretoria on Friday night.

Defensively superb, the DHL Stormers made the most of the few opportunities they had and left Pretoria with four tries – including a brilliant brace by Edwill van der Merwe (wing) – while the Vodacom Bulls were left wondering how they almost lost this match.

But “almost lost” is always better than “almost won”, and while the Vodacom Bulls will be happy with the full house of log points, they will probably not jump for joy at the video session on Monday.

The men from Pretoria had the most possession and territorial advantage, and while they clearly wanted to score tries, mistakes and wrong options almost cost them dearly in the end.

However, they made their last chance count when Nortje barged over after numerous phases in the DHL Stormers’ 22 and the clock in the red.

“You don’t want to win games like that, but in saying that, I am really, really proud,” said Jake White, the Vodacom Bulls’ Director of Rugby, after the match.

“I said before the game that the Stormers a really good team – lots of Springboks all over the field, coaching staff have been together for about six years and coached a lot of these players at junior level. I have aged, but I am really chuffed that we got the result.”

DHL Stormers head coach John Dobson bemoaned the high penalty count against his team – they conceded 16 penalties to the Vodacom Bulls’ five – and added that the high tackle count – the Capetonians made 262 tackles during the 80 minutes – eventually took its toll.

“You could say we showed some character, but it’s pretty much a heartbroken change room,” said Dobson.

“We are just very disappointed that we couldn’t close it out. We got ourselves on the wrong arm of the law today, and paid the price for it.”