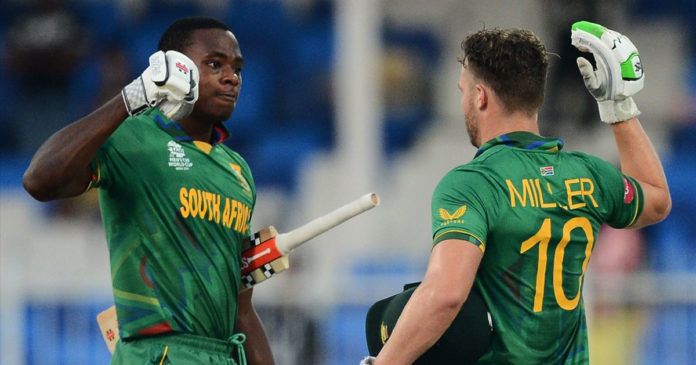 Needing 14 runs to win off the last over, Miller struck two huge sixes to take the Proteas close to a memorable win, before Rabada edged a boundary off the penultimate delivery to surpass the target of 143 set by Sri Lanka, who were restricted by three wickets apiece from Tabraiz Shamsi (3/17) and Dwaine Pretorius (3/17).

After winning the toss, the Proteas elected to put their opponents in to bat, with the South African bowlers doing well to limit the Sri Lankan batters with Nissanka and Charith Asalanka (21) combining for a 41-run stand before a run out and Shamsi’s three quick wickets put the batting side on the backfoot.

With wickets falling around him, opener Nissanka (72 off 52 balls; 6 fours, 3 sixes) showcased his talents at the crease, batting through to the 19th over to help Sri Lanka to a par score, while Pretorius helped himself to three wickets at the death, including that of Nissanka as Sri Lanka were skittled out for 142 after 20 overs.

In reply, the South African top-order batters made solid starts, with Quinton de Kock (12), Reeza Hendricks and Rassie van der Dussen (16) contributing to the scoreboard before Sri Lanka managed to pick up wickets at key moments to stem the flow of runs and reach the halfway mark on 62/3.

A fourth-wicket partnership between Temba Bavuma and Aiden Markram (19) worth 47 runs kept the Proteas in the contest, with captain Bavuma going on to top-score with a run-a-ball 46 (1 four, 1 six), before a Hasaranga de Silva (3/20) hat-trick tipped the game in the favour of Sri Lanka.

De Silva removed Markram, Bavuma and Pretorius (0) to bring Miller and Rabada to the crease. Miller smashed an unbeaten 23 off 13 balls (2 sixes) while Rabada notched up 13* off (2 fours) in their action-packed, 34-run stand to see South Africa over the line with just one ball to spare.

The triumph moves the Proteas into third place in Group 1, with a clash against Bangladesh awaiting them on Tuesday, 02 November.