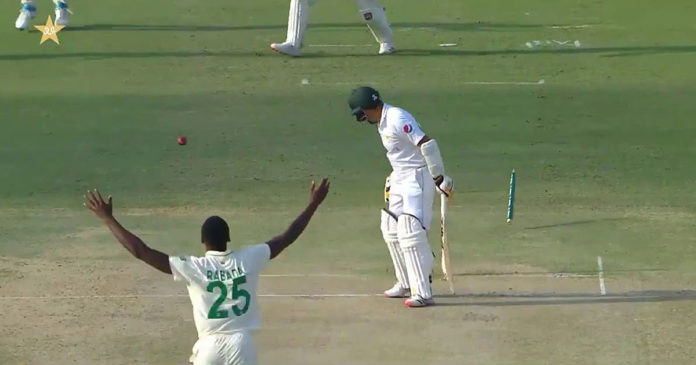 South Africa’s return to Pakistan to play Test cricket for the first time in 14 years was a mixed one after they disappointed with the bat but then impressed with the ball to end day one with honours even in Karachi on Tuesday.

After winning the toss and batting, the Proteas let themselves down by being dismissed for just 220 at the National Stadium, but their bowlers hit back impressively by rocking the top order of the home side and leaving them in tatters at stumps on 33 for four.

Earlier it was Dean Elgar who led the way for the disappointing tourists with his 16th career half-century. The opener top-scored with 58 (106 balls, 9 fours) as the South Africans threw away a good start to be dismissed in 69.2 overs.

Mark Boucher’s side were returning to the Asian country for the first time since 2007 when the coach was still a player and they won the series so impressively.

This time, though, they looked in trouble after poor performance with the bat, in which there were two needless run-outs and several batsmen were out needlessly.

Elgar’s opening partner Aiden Markram was out to a flying catch by Imran Butt for 13 after a Shaheen Shah Afridi (2/49) drew an edge, before Rassie van der Dussen (17) helped rebuild.

However, he was run out after attempting a single that was not there, with Faf du Plessis (23) and Quinton de Kock (15) also getting starts alongside Elgar.

They had helped the Proteas reach 133 for three at one stage, before the captain fell attempting a big shot – starting a major slide.

The visitors could have been out for even less, but George Linde (35), playing only after Tabraiz Shamsi suffered a late injury, and Rabada (21 not out) at least ensured they got substantially beyond the 200 mark.

Yasir Shah finished as the pick of the bowlers with three for 54.

South Africa desperately needed to be on the money with the ball on what was a slow wicket and the ever-reliable Rabada provided exactly that alongside Nortje with the new ball.

Openers Abid Ali (4) and Imran Butt (9) fell in the fifth and seventh overs after a miserly opening by the bowlers, with Maharaj then removing dangerous Babar Azam with a quicker ball that trapped the new Pakistan captain plumb in front leg before wicket for 7.

Nightwatchman Afridi was cleaned up by Nortje in the penultimate over ensuring the tourists stormed back well by the close.