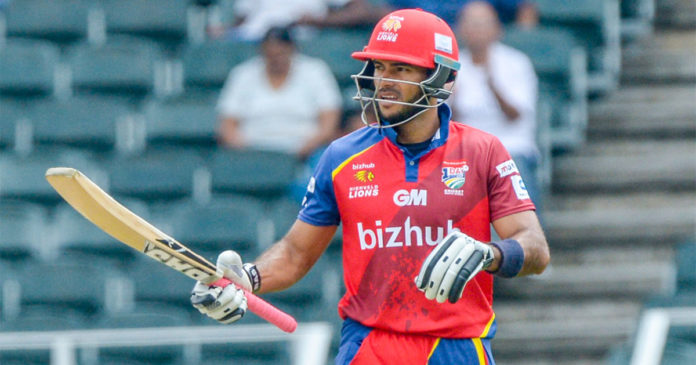 A 14th career ton from Reeza Hendricks was the catalyst for the Imperial Lions to make it five Momentum One-Day Cup wins from six as they edged out the Warriors by nine runs on the DLS Method in Johannesburg on Sunday.

The Standard Bank Proteas opener struck clubbed five sixes and six fours in an innings of 112 off 105 balls to help propel the hosts to an impressive 254 for five in a clash initially reduced to 39 overs per side on account of the weather.

Dominic Hendricks also struck 70 (80 balls, 7 fours) and shared in a stand of 142 alongside his namesake at the Imperial Wanderers.

Despite losing regular wickets, the visitors were in the hunt until late in the game thanks to Lesiba Ngoepe’s 94 off 70 balls (6 fours, 4 sixes), but they fell narrowly short.

The result meant that the Lions moved to 22 points on the table to stay second and in touch with the Hollywoodbets Dolphins (26), having played a game less.

They were dominant from the outset thanks to the two Hendricks’, who helped them motor along after the early loss of Ryan Rickelton (25) when they lost the toss and were asked to bat first.

The pair took their side to a powerful 185 for one in the 32nd over followed by Wihan Lubbe (20) then offering support late on as the innings ended strongly.

Stefan Tait finished as the best of the bowlers with three for 48.

The Warriors’ reply was very truncated after six wickets fell in the opening 20 overs in which Matthew Breetzke (31) was the top scorer and Aya Myoli (2/46) the main wicket-taker.

That left Ngoepe fighting almost a losing course from 110 for six, but he kept his chin up and added 76 with Ayabulela Gqamane (22) before falling six runs short of a deserved ton.

It looked like the end was nigh when he fell with more than 50 to get.

But the ever-reliable Sisanda Magala launched a late assault with five sixes that threatened the Lions with his unbeaten 37 off 21 balls, but he ran out of time.