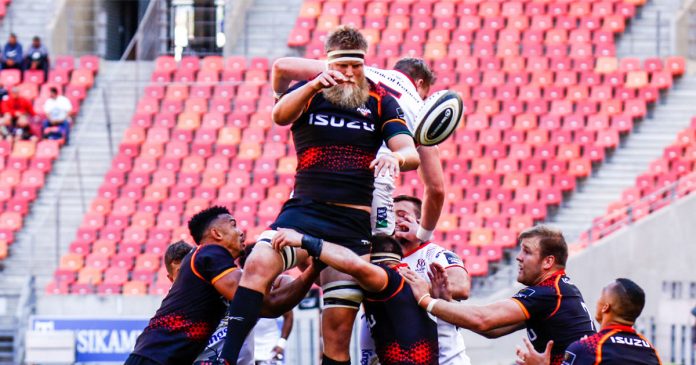 Experienced Toyota Cheetahs and Springbok scrumhalf, Ruan Pienaar, and Isuzu Southern Kings lock, JC Astle, were thrilled at the prospect of the 2019/20 Guinness PRO14 season kicking off in two weeks’ time and said their teams were ready to get down to business in the competition.

The Toyota Cheetahs will host 2018/19 finalists, the Glasgow Warriors, in the opening match of the competition in Bloemfontein on Friday, 27 September, while the Isuzu Southern Kings kick off their campaign against the Cardiff Blues at the Nelson Mandela Bay Stadium in Port Elizabeth on Saturday, 28 September.

Pienaar, who was a key figure in the Toyota Free State Cheetahs’ Currie Cup victory against the Xerox Golden Lions last Saturday, said at the Guinness PRO14 launch in Johannesburg on Thursday that the celebrations were now over, and the Free Staters were ready to stake a claim for the Guinness PRO14 title.

“We are very pleased with how the Currie Cup turned out for us” said Pienaar.

“It has been a great week with a lot of celebrations, but our focus is now on the Guinness PRO14, and we are excited to get going.

“The one thing we know for sure is that winning our home games will be very important, and with our first three matches in Bloemfontein, hopefully we can get the season off to a good start.”

Pienaar was pleased with the team’s form going into the Guinness PRO14 and said: “We played eight matches in the Currie Cup and that was great preparation for us. This competition is a completely different challenge though, with a different style of rugby, as both South African teams learned in the last two seasons, but we are very excited for this campaign.”

The calm and collected scrumhalf was excited to represent the Toyota Cheetahs in the competition after making his mark at Irish club Ulster previously and said: “It is good to be back in Bloemfontein and to play for the team that I supported since I was a little boy. That said, I am looking forward to playing against some of the teams and players that I got to know well over the years in the competition.”

Astle shared Pienaar’s excitement after their warm-up matches against Georgia in Tbilisi (in which they went down 24-20) and Namibia in Windhoek and Walvis Bay (which were also close, with the side going down 28-22 and 21-17 respectively) and said: “We had a good preseason of about 12 weeks and we played a few warm-up games, so we have really been working hard, and we are excited about the season ahead.

“Last season and we came close to winning quite a few matches (the team suffered defeats of seven points or less in seven matches), so we can certainly take confidence from that. But we have a new team, with a few new faces, so hopefully a few more results will go our way.”

Astle said improved results aside, one of their main goals was to restore the faith their home crowd in had in them.

“We are building as a team, and we realise that it takes time to achieve this. But we really want to go out there, play good rugby, win more matches and make the people of Port Elizabeth proud of us,” said Astle.