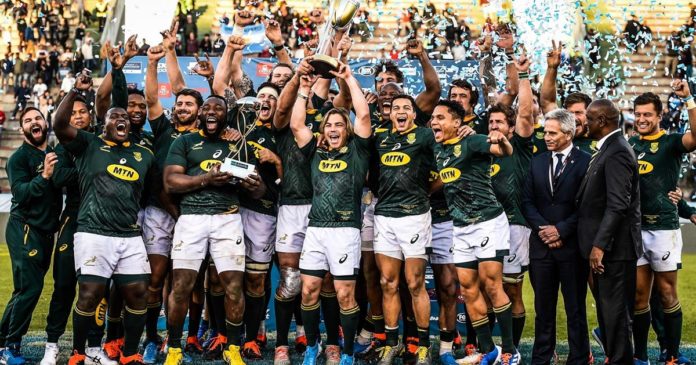 The Springboks will start the defence of their Castle Lager Rugby Championship title against Argentina, when they return to the Nelson Mandela Bay Stadium for the first time since 2018 in the opening two Tests of their 2021 campaign.

SA Rugby announced on Monday that the two Tests against Los Pumas will be played on consecutive weekends straight after the Castle Lager Lions Series and are scheduled for 14 and 21 August, with both kicking off at 17h05 at the Nelson Mandela Bay Stadium.

The last time the Boks played in Nelson Mandela Bay was on 29 September 2018, when they beat Australia by 23-12 in the penultimate round of the Castle Lager Rugby Championship.

“We are very grateful to Argentina for having agreed to play their home match against the Boks in the Castle Lager Rugby Championship here in South Africa,” said Jurie Roux, CEO of SA Rugby.

“Unfortunately, there is little prospect that spectators will be allowed to attend matches, but we are pleased to be returning to the Eastern Cape for these important Tests.

“They mark our return to the Castle Lager Rugby Championship, and we’re excited to resume competition with Argentina, Australia and New Zealand after missing out in 2020, when we were due to defend the title.”

Cllr. Nqaba Bhanga, Executive Mayor, said: “Nelson Mandela Bay is proud to host the Springboks and Argentina for these matches. As a Metro we are fast becoming known as a sporting destination of choice.

“We have in recent months hosted many incident free sports fixtures at our world-class Nelson Mandela Bay Stadium, and look forward to doing so again. The hosting of these matches is especially bitter-sweet as we mourn the recent loss of EPRU President Andre Rademan, a stalwart of rugby in our Metro and Province.”

Argentina’s last visit to the Friendly City was in 2017, when the Boks scored four tries in a comprehensive 37-15 win.

“Because of all the health and safety and logistical considerations that come with COVID-19 we decided to minimise the risks and reduce the logistical challenges by playing both Tests in one city and venue,” said Roux.

“We will work with the Eastern Province Rugby Union on delivering a safe and enjoyable experience for the teams in a world-class facility.”

The Springboks have a very good record at the Nelson Mandela Bay Stadium, having won five and drawn one of their six matches at the venue.

Following the Boks’ two Tests in Nelson Mandela Bay, they Boks are set to depart to Australia for two clashes with the Wallabies, in Sydney and Brisbane, before transferring to New Zealand to face the All Blacks in Dunedin and Auckland on four consecutive weekends in September and October.

Due to the latest travel restrictions put in place by the New Zealand Government, SANZAAR announced last Friday that it was reviewing options for the match schedule for the Castle Lager Rugby Championship.