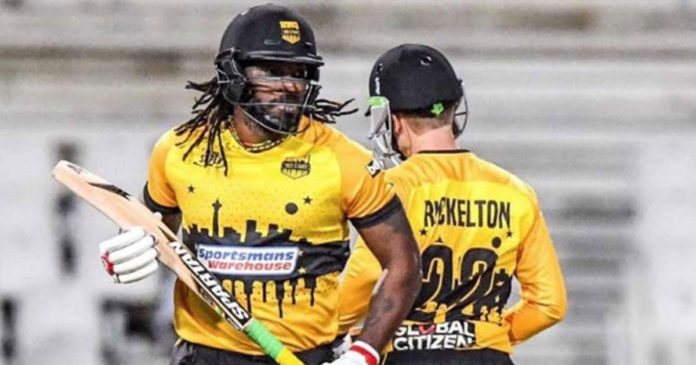 Jozi Stars coach Donovan Miller admits it has been a tough start to his tenure, but the Jamaican is confident that the defending champions can turn the tables when they play their fourth Mzansi Super League (MSL) match of the campaign on Saturday.

The 2018 winners are the only pointless team in the competition after losing all three of their games thus far and must now try to regroup ahead of their game with the Nelson Mandela Bay Giants in Johannesburg.

They showed encouraging signs when MSL 2.0 launched in spectacular fashion last Friday, missing out to the Cape Town Blitz in a high-scoring affair at the Imperial Wanderers.

But, after two disappointing displays on the road, they are back in the familiar surroundings of the Bullring, where Miller is banking on some of his senior men to stand up.

“It hasn’t been the start we wanted,” he said after losing a second game to the Blitz, on the road this time. “In terms of preparation, team spirit and camaraderie, we have all of that.

“We practise well, we say the right things in team meetings, we do all the planning in terms of these games, but the players just haven’t managed to put it together in all three departments.

“On occasion we’ve batted well in games but it’s not consistent as we showed against the Blitz in Cape Town. The senior guys just didn’t step up and that cost us another loss.”

Last season, the Stars were in a similar predicament after losing three out of their opening four matches, before a magical second half of the campaign.

“It’s not the ideal situation we want to be in, but last year we were in the same position and managed to push on,” Miller, who replaced Enoch Nkwe as coach recounted. “I think every game from here on is a final.

“We’re back in Jo’burg for the next one and hopefully we can get the win we’re looking for to kickstart our season.”

The coach was also questioned about the form of his marquee international, Chris Gayle. T20’s most successful batsman in history has managed scores of 17, 18 and 0 so far. He only has three more games to play too, before moving on to other commitments, with Pakistan’s Shoaib Malik waiting in the wings.

“We have to look at it as every player is equal in this team,” Miller adds. “We made a good decision by bringing in a young man like Gerald Coetzee for the last game and I was impressed with him.

“But we now have to make some other decisions. Chris is a world-class player and we all know he can turn it on at any time, so that’s also something we have to consider.”

Meanwhile, Giants coach Eric Simons is not taking anything for granted against the champions. The men from Port Elizabeth are unbeaten so far, having won one match and seen the other washed out when they were ahead in the game.

They are second on the table ahead of the clash and Simons expects a dangerous Jozi to pitch up come game-time. “Until the dust really settles on a campaign you never really can write anyone off,” he said. “The reality of T20 cricket is that a team that has their backs to the wall is a very dangerous team.

“We know that all the teams are very evenly balanced in terms of ability; it’s certainly not a reflection of their ability to have lost three in a row.

“It sometimes goes that way and we will show them the respect they deserve, as it is with any opposition.”

All matches in the MSL are being broadcast exclusively live on SABC.