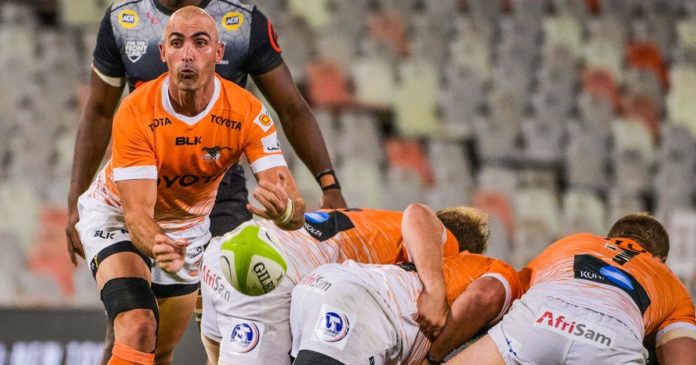 Seven games in, and already the Carling Currie Cup has seen its share of upsets, thrillers, ridiculous tries and golden moments to last for a long time.

It’s been a topsy turvy start for the Lions and DHL Western Province in the Premier Division – after losing to the New Nation Pumas last weekend, the men from Joburg hit back in style against the Capetonians on Wednesday evening, which included a few very nervous moments at the end.

DHL WP returned to Cape Town from their mini-tour to Gauteng with seven log points – a full house against the Vodacom Bulls last Saturday, and two more against the Lions at Emirates Airline Park, but with 10 minutes to go it looked like the men in the hooped jerseys were on the receiving end of a proper hiding.

Lions bounce back in thriller against DHL WP

The Lions completed an extraordinary Carling Currie Cup victory over a never-say-die DHL Western Province side in a 38-32 try-fest in Johannesburg on Wednesday night.

With just over 10 minutes to go, the home team were firmly in control, but two yellow cards in quick succession opened the door for the Capetonians to score three late tries to put themselves in a position to snatch victory from the jaws of defeat.

Evan Roos (flanker) was a marauding presence with ball in hand and got DHL WP on the front foot late in the game, but they ran out of time, with the Lions’ improved defence, better use of their opportunities, more clinical attack and intensity – especially in the first hour – setting the tone for the win.

This weekend, the action kicks off at Loftus Versfeld on Friday evening, where the Vodacom Bulls will be looking to bounce back against the New Nation Pumas.

The Lowvelders will travel to Pretoria full of confidence after hammering the Lions last weekend, while the Vodacom Bulls are aiming for their first win of the season.

The New Nation Pumas won the last Carling Currie Cup clash with the men from Pretoria, by 44-14 at Mbombela Stadium, but the Vodacom Bulls will be bolstered this week by a host of players who played in the Rainbow Cup final last weekend and will be determined to get the result at home.

The Toyota Cheetahs will get their first taste of action in 2021 when they travel up the N8 to Kimberley to face Tafel Lager Griquas in a Central Derby on Saturday.

The Peacock Blues recently won a warm-up clash between the two sides, but the Free Staters are known for putting their best foot forward in the Carling Currie Cup and the hosts in Kimberley will take nothing for granted.

The last time they met, in January, the Toyota Cheetahs won thanks to the irrepressible boot of Springbok Frans Steyn, even though Tafel Lager Griquas outscored their neighbours by two tries to one in Kimberley.

Steyn is currently in camp with the national team, but the Toyota Cheetahs will have their other Springbok talisman, Ruan Pienaar, back on duty for this clash.

The two inland teams in action this weekend, the Leopards and Down Touch Griffons, will be looking to build on their strong starts to the Carling Currie Cup First Division when they host the SWD Eagles and Eastern Province.

Potchefstroom is never an easy destination and the Eagles will have taken notice of the Leopards’ good win last weekend.

Down the road in Welkom, the Down Touch Griffons host Eastern Province in a match where the home side will run out as favourites after their good win in East London last weekend.

In the other First Division game of the weekend, the Bulldogs travel to Wellington to take on the Boland Kavaliers, who will be making their debut in the competition this year.

The log-leading Valke have a bye this weekend.