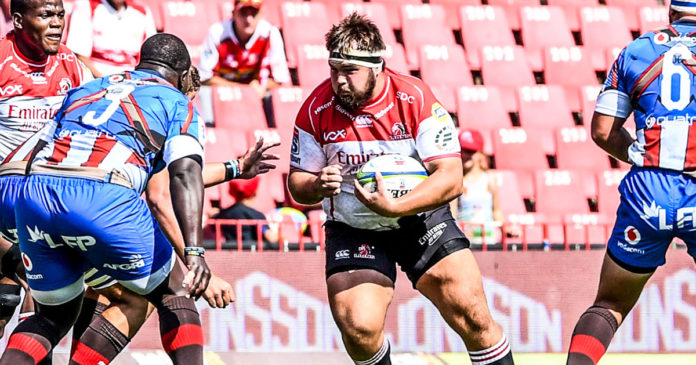 The Vodacom Super Rugby tour baton will be passed from the Cell C Sharks to the Emirates Lions this weekend, while the Vodacom Bulls and DHL Stormers will hold the fort in the fifth round here in South Africa.

The Emirates Lions kick off their four-match tour of Australasia on Friday morning (10h15 SA time) against the Waratahs in Sydney with a reshuffled front row.

Springbok outside centre Lukhanyo Am returns to the starting line-up to lead the Cell C Sharks in their last Australasian tour match on Saturday against the Reds in Brisbane (10h15 SA time).

In Cape Town, the DHL Stormers host the visiting Blues on Saturday as they seek a fifth straight win (15h05), after which the Vodacom Bulls take on the Jaguares in search of their first win of the season in the late-afternoon match (17h15).

All the Vodacom Super Rugby round rive action will be televised live on SuperSport1.

Emirates Lions coach Ivan van Rooyen made four changes – two upfront and two at the back – to his starting fifteen for their round-five match against the Waratahs in Sydney on Friday.

A re-jigged front row will face the New South Welshmen at Bankwest Stadium. Carlu Sadie (tighthead prop) and Jan-Henning Campher (hooker) will start, with Jannie du Plessis dropping out of the match-23 and Pieter Jansen moving to the bench.

The Emirates Lions will be aiming for their sixth successive victory over the Waratahs, which includes only one match in Sydney back in 2018 when they blanked their hosts by 29-0.

Am returns for Cell C Sharks’ final tour game Down Under

Lukhanyo Am is back at the helm for the Cell C Sharks after a rest week for their final Australasian tour match against the Reds in Brisbane on Saturday.

Cell C Sharks head coach Sean Everitt made four changes to the side that beat the Rebels last weekend, most of them rotational. While Am is back in the team this weekend, in place of Jeremy Ward at outside centre, the trio of Makazole Mapimpi, Tyler Paul and James Venter will not face the Reds as a result of rotation.

The Reds will be looking to build on their impressive recent home record against South African opposition – they have won six on the trot against teams from the Republic playing in Brisbane.

Springbok prop Trevor Nyakane has been entrusted with the captaincy as the Vodacom Bulls aim to break their early-season losing streak against the Jaguares in Pretoria on Saturday.

Nyakane takes over as skipper from the injured Burger Odendaal and will lead a team showing six changes from last weekend’s heart-breaking last-minute defeat to the Blues.

With Odendaal out, Vodacom Bulls coach Pote Human has opted to move Johnny Kotze to inside centre, with Tongan international Nafi Tuitavake set to make his debut for the Pretorians at outside centre.

It will be a special occasion for Springbok fullback Warrick Gelant, who will earn his 50th Vodacom Super Rugby cap on Saturday. He made his debut in 2016 against the DHL Stormers and has scored 15 tries in the famous blue jersey.

The Jaguares have won four of their six Vodacom Super Rugby clashes with the Vodacom Bulls, including a 22-20 victory in Pretoria last year – a game in which the Argentinian side won despite trailing at halftime.

The unbeaten DHL Stormers have made two rotational changes for Saturday’s home Vodacom Super Rugby clash with the Blues in Cape Town. Kick is at 15h05 and the match is live on SuperSport1.

As the only unbeaten team remaining in Vodacom Super Rugby, the Capetonians will be aiming to make it five straight wins when they take on the Auckland-based team.

There are two further changes to the DHL Stormers’ replacements bench, with former Junior Springbok prop Kwenzo Blose set to make his debut when he comes on, and utility forward Cobus Wiese back in the matchday squad.

The DHL Stormers have won six of their last eight outings against the Blues and that successful run includes four consecutive home wins against the Aucklanders, while they are also unbeaten in their last three matches against Kiwi opponents (W2, D1).

The other Round 5 fixtures are (SA times):