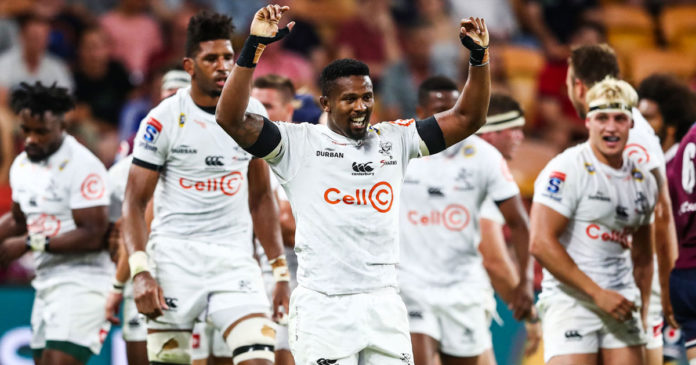 The Cell C Sharks outplayed the Reds 33-23 on Saturday morning in Brisbane to end their four-game Vodacom Super Rugby tour of Australasia on a high note. They now return to South Africa with three wins from four away games.

However, the Emirates Lions, DHL Stormers and Vodacom Bulls all suffered disappointment in their fifth-round matches.

The team from Joburg failed to get their tour off to a winning start as they went down 29-17 to the Waratahs in Sydney, while the DHL Stormers tasted defeat for the first time this season when the Blues stunned them 33-14 in Newlands. The Jaguares kept the Vodacom Bulls winless by clinching a convincing 39-24 triumph in Pretoria.

Despite their surprise loss, the Cape side still lead the South African Conference on 17 points, just one point ahead of the Cell C Sharks. The Jaguares are third on 15 points and they are followed by the Emirates Lions (5) and the Vodacom Bulls (1).

The Cell C Sharks made it three from four touring match wins when they outplayed the Reds 33-23 on Saturday morning (SA time) at the Suncorp Stadium in Brisbane.

The visitors from Durban trailed the Queenlanders 11-8 at halftime but turned things around and clinched the game thanks to a dominant second half performance.

With their forwards setting the tone, the visitors scored three tries after the break, while flyhalf Curwin Bosch hit the target with two sweetly struck long-range penalty goals to take the game away from the Reds.

Jaguares down Vodacom Bulls for bonus-point win at Loftus

Strong running wing Emiliano Boffelli bagged two tries as the Jaguares scored a 39-24 bonus-point win over the Vodacom Bulls in Pretoria on Saturday evening. The South Americans led 24-14 at the break and were in control for the majority of the match.

The result of this Vodacom Super Rugby round five encounter means the Pretoria side are still the only team in the competition without a win this season.

The Vodacom Bulls came into the match desperate for a win on their home turf, however, an erratic first-half display handed the advantage to the side from Buenos Aires. The visitors scored two tries in quick succession just before the halfway break to create a 10-point gap.

They scored three more tries in the second half to condemn the men from Pretoria to their fourth straight loss of the 2020 competition. The Jaguares now travel to the east coast for next weekend’s encounter with the returning Cell C Sharks in Durban, while the Vodacom Bulls host the Highlanders at Loftus.

The Blues inflicted the first loss on the DHL Stormers for this year when they defeated the Cape side 33-14 in their fifth-round Vodacom Super Rugby encounter on Saturday afternoon in Cape Town.

The Aucklanders made a superb start and led 27-14 at halftime, no doubt helped by a very lethargic first-half display that was characterised by poor options and missed tackles. They were 20-0 up inside 21 minutes in front of a stunned DHL Newlands faithful.

Wing Joe Marchant was the outstanding player for the side from Auckland, scoring two tries and clinching the Vodacom Player of the Match award in the process.

The Emirates Lions paid the price for a slow start against the Waratahs in Sydney and eventually went down by 29-17 in their Vodacom Super Rugby match played on Friday morning (SA time).

The win came as a welcome relief for the New South Wales side, who managed to register their first victory of the 2020 season, while they also snapped a five-game losing run against the team from Johannesburg. The Waratahs also bagged an important bonus-point after outscoring the Emirates Lions by five tries to two.

Hard-working flank Marnus Schoeman was the visitors’ standout player and he was rewarded with two tries.

Although the Joburg team played much better in the second half, they made far to many handling errors, which eventually allowed the Waratahs to pull clear for a comfortable first win of the season. James Ramm and Tetera Faulkner were their second half try scorers.

The Emirates Lions now travel to Melbourne for next weekend’s clash with the Rebels.

The weekend’s other Round 5 results: