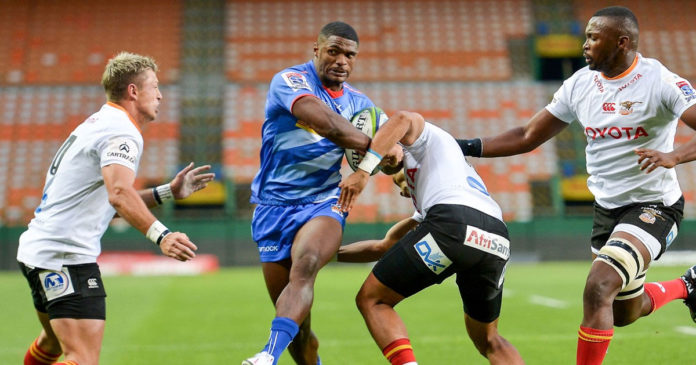 The DHL Stormers and the Cell C Sharks closed the gap on log leaders Vodacom Bulls to just two points with only one round remaining following their Vodacom Super Rugby Unlocked wins over the  Toyota Cheetahs and Tafel Lager Griquas respectively.

The Cape side, with flyhalf Damian Willemse in commanding form, moved to second spot on the log with 17 points from five games as a result of their 30-13 home victory over the Toyota Cheetahs on Saturday evening.

Cell C Sharks flyhalf Curwin Bosch was again the hero for his team when the kicked the winning penalty at the end of their exciting clash with the Tafel Lager Griquas in Kimberley to hand the Durban outfit a dramatic 34-33 win on Friday night.

The Durbanites also have 17 log points, but the men from the Cape have a better points difference. The Vodacom Bulls lead the standings on 19 points.

The game between the Emirates Lions and Phakisa Pumas scheduled for Emirates Airline Park on Saturday afternoon was postponed in line with COVID-19 protocols.

In next weekend’s final round of fixtures the Vodacom Bulls host the Phakisa Pumas on Friday in Pretoria (19h00), the Toyota Cheetahs have a home match against the Tafel Lager Griquas in Bloemfontein (16h30) while the Cell C Sharks face the DHL Stormers in Durban (19h00).

DHL Stormers stay in the hunt with home win

The DHL Stormers made sure they stay in the hunt for top honours of the Vodacom Super Rugby Unlocked when they outplayed the Toyota Cheetahs 30-13 at DHL Newlands in Cape Town.

The win saw DHL Stormers move up to second place on the league table with 17 points from their five games, still two points behind leaders the Vodacom Blue Bulls who had a bye this weekend.

The first half saw a tight arm wrestle between the two sides, with the home side eventually edging ahead to lead by 13-3 at the halftime break.

However, some enterprising play by Springboks Warrick Gelant and Damian Willemse – combined with some powerful scrumming in the second half – secured a convincing and vital win for the home team and a second loss in a row for the team from Bloemfontein.

Bosch sparkles in the Diamond City

Flyhalf Curwin Bosch kicked an 81st minute penalty goal to guide the Cell C Sharks to a dramatic 34-33 win over Tafel Lager Griquas in their match in Kimberley on Friday evening, where the lead changed no less than eight times.

Just one minute earlier, Tafel Lager Griquas flyhalf Tinus de Beer had kicked a clutch penalty goal to put the home side 33-31 ahead at Tafel Lager Park just as his side looked they were on their way to clinching their first win of the competition.

However, unfortunately for the North Cape side, the script was not yet done.

The Durbanites won back the last restart and attacked from way out and when referee Griffin Colby penalised the home side for a ruck infringement, Bosch stepped up to kick the winning points.

The previous 78 minutes had delivered a real feast of rugby, with the home side first enjoying a 9-7 lead at the break and then a 13-point lead with 15 minutes to play. If the Cell C Sharks deserved this victory, it would be their refusal to stop chasing the win, and that proved vital in the end.