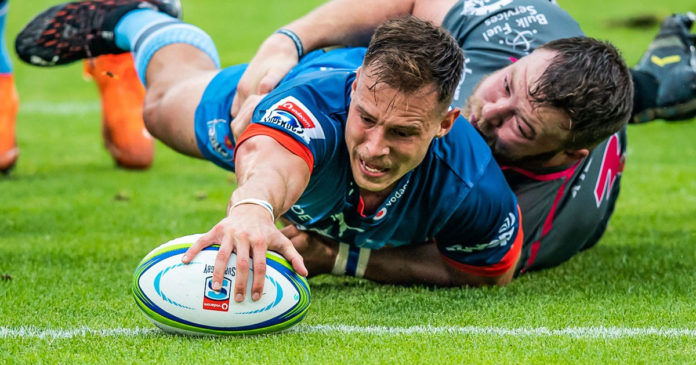 The Vodacom Bulls delivered a dominant first half performance against the Phakisa Pumas at Loftus Versfeld on Saturday to finish their Vodacom Super Rugby Unlocked campaign on a winning note with a 21-5 victory and the honour of being crowned the champions.

The win was their fourth in a row in the competition and their fifth victory in six matches since Vodacom Super Rugby Unlocked kicked off in October, not long after the interrupted season was restarted.

With the clash between the trailing DHL Stormers and Cell C Sharks cancelled, the Vodacom Bulls entered their final match of the competition at the top of the standings with the title essentially sealed, but they continued to make their presence felt for yet another victory.

The Toyota Cheetahs also ensured that they finished their Vodacom Super Rugby Unlocked campaign on a high note as they overcame a strong challenge by Tafel Lager Griquas in Bloemfontein for a 28-9 win – although the match was tighter than the scoresheet reflected.

The Vodacom Bulls overpowered the Phakisa Pumas on a sopping wet Loftus Versfeld turf on Saturday afternoon to claim a 21-5 victory and clinch the Vodacom Super Rugby Unlocked title.

The hosts were in control from the first half, dominating possession and territory, and they backed this up with good finishing to score three tries to none for an encouraging 21-0 halftime lead.

The Phakisa Pumas finally made their way onto the score sheet six minutes into the second half and they continued to threaten on attack as the half progressed, but a combination of the Vodacom Bulls’ effective defence and errors denied the Lowvelders from converting it into points.

The Vodacom Bulls, in turn, were unable to add to their score, but their impressive first-half performance was enough to secure the 21-5 victory.

The Toyota Cheetahs scored three tries from clever kicks to finish their Vodacom Super Rugby Unlocked campaign on a winning note with a 28-9 victory over Tafel Lager Griquas in Bloemfontein on Saturday afternoon.

Two late tries gave the Free Staters’ score a bit of a boost though as the match was much tighter than the final score reflected as they had to claw their way back from a one-point deficit at the break to score 20 unanswered second half points.

The wet conditions made handling difficult and put extra emphasis on tactical awareness, while it also laid a platform for the forwards to get stuck in.

The Toyota Cheetahs’ discipline let them down at crucial times, which allowed Tinus de Beer (flyhalf) to keep the scoreboard ticking over for Tafel Lager Griquas.