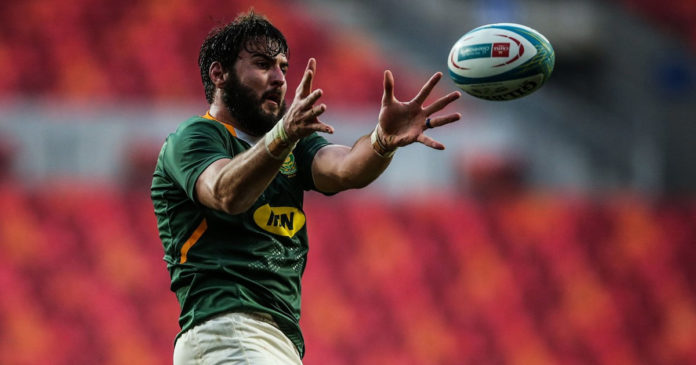 Springbok coach Jacques Nienaber has made wholesale changes to the team for the second Castle Lager Rugby Championship Test against Argentina, while Lood de Jager will run out for his 50th cap, Marvin Orie will earn his first Test start and the uncapped Nicolaas Janse van Rensburg has been named on the replacements bench.

The starting team shows 11 changes from last week – six in the backline and five upfront – with Nienaber bringing back a host of players who featured in the recent series win over the British & Irish Lions.

In total, the match-23 shows 17 changes from the squad that beat the Pumas 32-12 in the opening match last Saturday. The only players who will start again this weekend are De Jager (lock), Siya Kolisi (captain and flank), Jasper Wiese (No 8), and Cobus Reinach (scrumhalf).

Reinach will start in the same backline that secured the Castle Lager Lions Series win in the final Test against the British & Irish Lions two weeks ago, which sees Handré Pollard back at flyhalf, Damian de Allende and Lukhanyo Am return to the midfield, and Makazole Mapimpi, Cheslin Kolbe (wings) and Willie le Roux (fullback) at their posts in the back three.

Orie, who has made all five of his Test appearances off the bench, as well as Malcolm Marx (hooker) and Trevor Nyakane (prop) have been promoted to the starting team, where Thomas du Toit (prop) will also start his first Test of the season.

The only change in the loose trio is at flank, where Franco Mostert steps in for Kwagga Smith, who moves to the bench in place of the injured Marco van Staden.

The replacements bench, which features a six-two split of forwards yet again, also has a new look to it, with Janse van Rensburg joined by Bongi Mbonambi (hooker), Steven Kitshoff and Frans Malherbe (both props), all of whom return to the fold after getting a break last weekend.

The two backs on the bench are scrumhalf Jaden Hendrikse – who scored a try on debut last weekend – and Damian Willemse (utility back).

“A few players didn’t play last week after a physically demanding Castle Lager Lions Series, and are now back in the mix, while we also wanted to give a few players who have worked hard at training over the last two months a chance to get some valuable game time,” said Nienaber.

“This is a long season, so we need to get the balance right between building consistency in selection and in our performances, managing the players in terms of their workload, and building depth within our squad.”

Nienaber congratulated De Jager – SA Rugby’s Player of the Year in 2015 who made his Test debut a season earlier – on becoming the fourth player this season to earn a half century of Tests.

“Lood is a stalwart, and his work ethic is admirable, so we are excited to see him achieve this big feat,” said Nienaber.

“It takes special character to feature and perform consistently at international level and to play 50 Tests for the Springboks, and Lood is certainly deserving of this accolade.”

Nienaber was also pleased to see Janse van Rensburg earn his place amongst the replacements after making appearances for the South Africa ‘A’ team against the British & Irish Lions and Vodacom Bulls last month.

“Nicolaas has been with the squad since our conditioning camp in Bloemfontein in June and it has been great to see him get stuck in at our training sessions, so this is a fantastic opportunity for him,” said the Springbok coach.

Zoning in on the fixture, Nienaber said they are expecting Argentina to come out firing this week.

“Argentina will come hard at us, so we know we need to perform much better than last week to get the desired result,” he said.

“While we were pleased with the victory and to start our Castle Lager Rugby Championship campaign on a winning note, there was a lot of room for improvement in our performance.

“We’ve identified a few areas we need to work on if we want to defend our title successfully, and we will work on those aspects of our game at training this week.

“Argentina plays with a lot of passion, much like we do, so they’ll want to show their fighting spirit, which will set the scene for another challenging Test match between us.”

Karl Dickson (England) will be the man handling the whistle, with South Africans Marius van der Westhuizen and AJ Jacobs performing the assistant referee duties, while Tom Foley (England) will serve as the TMO.