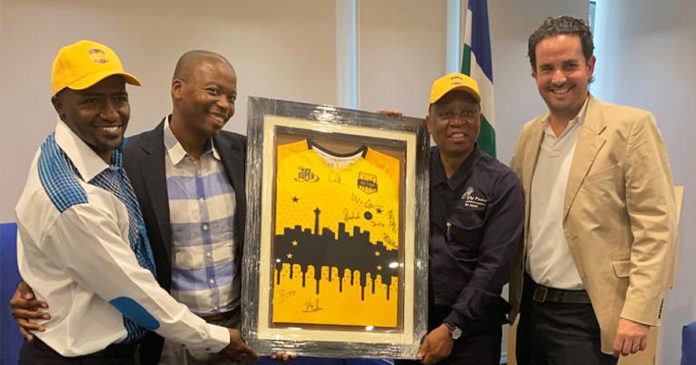 The Executive Mayor of the City of Johannesburg, Mr Herman Mashaba, today gave his and the city’s full backing and support to the reigning Mzansi Super League champions, Jozi Stars.

“I would like to thank Mayor Mashaba for his absolute support of the Jozi Stars: We assure you that we’ll deliver the on-field goods; whilst the thrilling City of Joburg will host our fans in true VIP style as together we ignite the game that we all love so dearly,” commented Central Gauteng Lions CEO Mr Jono Leaf-Wright.

“The Imperial Wanderers Stadium is a truly iconic venue that welcomes all domestic and foreign visitors and the greater LGBTQ+ME community is ready to host the opening match on the 8th of November 2019,” commented Mayor Mashaba.

Chairperson and President of the Central Gauteng Lions Jack Madiseng said: “Jozi Stars is the team that emanates from Joburg/Jozi commonly known as the City of Gold and represents a city of hope, inspiring new possibilities, where dreams and stardom are realized. It is a melting pot of various cultures, its arts, diversity, wealth, rich history, heritage and by no means least its passion for sport.

“What makes Joburg tick is its people, their candid nature, unconventional, can do spirit, cosmopolitan and afropolitan spirit. ‘Joburgers’ are the real contributors to the city’s creative, economic and sport pulse.

“The Jozi Stars brand seeks to serve as a reminder about the greatness of ‘Joburgers’, their belief that they can achieve what they set their minds to, Our partnership with the City of Johannesburg seeks to not only promote the game but what the City of Joburg offers in terms of creative pulse, tourism, arts, food, fashion and entertainment amongst others.” concluded Mr. Madiseng.