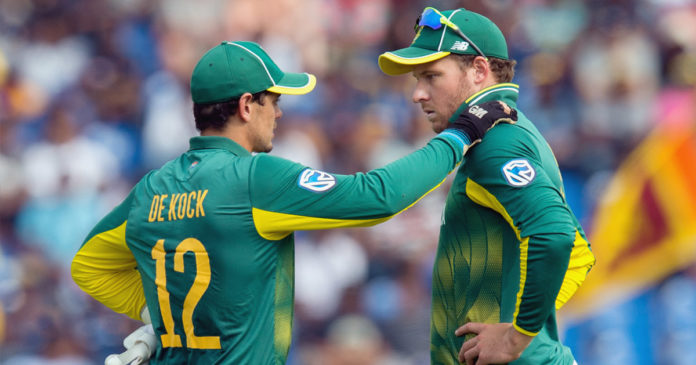 He made his international debut in December 2012 after an impressive showing at that year’s ICC U19 Cricket World Cup in Australia and was called up into the ODI squad just a short month later.

The 27-year-old wicket-keeper batsman boasts 115 ODI caps with 4 907 runs. An exciting talent from the beginning, De Kock has been one of South Africa’s standout and most consistent batsmen for several seasons with an ODI average of 45.01, 14 centuries, 24 half-centuries and a high score of 178 (off 113 balls, 16×4, 11x6s) which he made against Australia at SuperSport Park in September 2016.

“We all know the quality of the player that Quinton de Kock has grown to become. Over the years, we have watched him grow in confidence and become one of the top ODI wicket-keeper batsmen in the world. He has a unique outlook and manner in which he goes about his business and is tactically very street smart. We are confident that the new leadership role will bring out the best in him as a cricketer and that he can take the team forward into the future and produce results that South Africans the world over can be very proud of. We wish him the very best in this new role and look forward to watching him make his mark in this series against the World Cup Champions.”

With two weeks to go until the start of the ODI series against the reigning ICC World Cup Champions, CSA is delighted to also announce the following players who will make up the 15-man squad:

It is a young and exciting squad that boasts the cream of the South African domestic set-up’s crop. It is with great pride that the selectors have identified five players who are receiving an ODI call-up for the very first time, they are; Lutho Sipamla, Sisanda Magala, Bjorn Fortuin, Janneman Malan and Kyle Verreynne. CSA endeavours to reward consistently good performances and saw this series as an opportunity to reward youngsters who have excelled in the domestic structures for some time, while giving senior members of the Proteas team a rest in the heavily scheduled international season that faces them.

Four of the named players’ selection is dependent on their passing a fitness test as they work in the CSA Centre of Excellence in Pretoria to be match ready by the time the team meets in Cape Town on 31 January. Those players are Lungi Ngidi (who is making a comeback from injury), Sisanda Magala, Tabraiz Shamsi and Jon Jon Smuts.

“We are really pleased with the squad we have selected, it is a good indication of the depth that we have in the country. The road towards the 2023 Cricket World Cup starts now and we want players doing well in our domestic structures to see the rewards of the hard work that they have put in. The pool that we build going forward is going to be vital in the selection of that 2023 World Cup squad but also without looking too far ahead, we are confident that we have players that will make South Africa proud in this ODI series against a confident England team.”