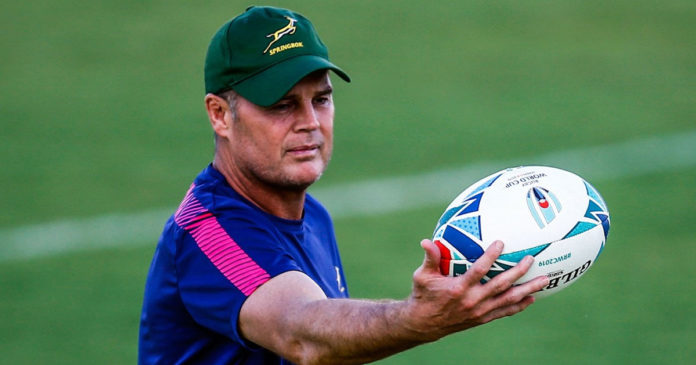 SA Rugby Director of Rugby, Rassie Erasmus, on Monday congratulated the four Carling Currie Cup semi-finalists and praised all the participating sides for their perseverance in what has been a challenging 2020 season.

Erasmus also lauded competition sponsors, Carling Black Label, for their unwavering support as a partner during one of the most trying seasons in rugby’s history – both on and off the field – due to the COVID-19 pandemic.

The Vodacom Bulls will host the Xerox Lions in Pretoria on Saturday at 14h00 in the first Carling Currie Cup semi-final, with the action moving to Cape Town at 16h30 for the second playoff match between DHL Western Province and the Cell C Sharks.

The winning teams will progress to the final on Saturday, 30 January.

“The 2020 Carling Currie Cup was certainly an anomaly with the COVID-19 pandemic creating a cloud of uncertainty both in terms of training and the match schedule,” said Erasmus.

“I would like to thank all the teams for their perseverance and the admirable way in which they responded to these challenges.

“This season tested the coaches, players, management staff and the provincial unions in a variety of ways, and despite this, we are preparing for an exciting end to the season where a champion will be crowned.”

Erasmus added that the players and management involved in the season will know the full extent of the sacrifices that had to be made, and he also expressed his appreciation to competition sponsors, Carling Black Label.

“Those who experienced the trials and tribulations of this season first-hand will probably have a true understanding about what the season involved,” he said.

“The cancellation and postponement of matches, players and management being out of action for 16 days after contracting the COVID-19 virus, matches in searing 37 degree heat, and team members spending Christmas and New Year away from their families for the first time are only a few of the changes they had to adjust to this year, and for that I would like to extend my gratitude to all involved.

“I would like to extend my sincere thanks to Carling Black Label for putting their name and weight behind one of our flagship tournaments in a year that tested most industries and businesses to the limit – and had a direct impact on their business.

“Their commitment certainly illustrates their passion for rugby and the Carling Currie Cup”.

Erasmus said announcements on forthcoming competitions, Springbok team developments, and the shape of the 2021 season will be communicated once the details are finalised.