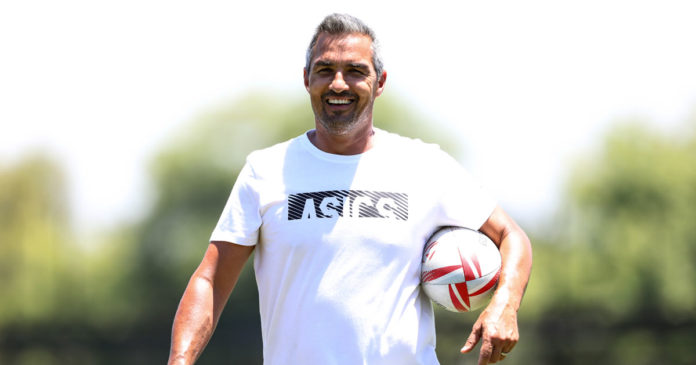 A new route to the USA, a change in format and a new venue for the fifth tournament of the HSBC World Rugby Sevens Series mean an extra day of preparation for the Springbok Sevens team as they gear up for the HSBC LA Sevens at Dignity Health Sports Park in Carson, Los Angeles.

The team travelled from Cape Town to Los Angeles via Newark, which eliminated 11 hours of their average travel time to the USA, while the venue of the first to two North American tournaments was moved from Nevada to the Californian coast.

Furthermore, the Las Vegas tournament was a three-day event, with Los Angeles being played on Saturday and Sunday.

This will help the Blitzboks in their final preparation this week, confirmed Springbok Sevens coach Neil Powell.

“The flight already made a huge difference for us,” said Powell.

“It is the first time we flew directly to the USA, normally we went via London and had another transit before getting to Las Vegas, where the Friday start meant a three-day turnaround.

“This time out, we cut out travel time and an extra flight, so will have more than enough time to recover and prepare.”

Powell feels fairly settled with his squad and only made three changes to his squad from the last tournament in Sydney, something that will assist in continuing with the momentum gained in Australia.

“Yes, we did travel to Australasia with half a dozen changes from the Cape Town leg and that had a bigger impact than expected in our performances in Hamilton. The Sydney effort was much more to our standards and one we need to back up here in the USA,” said Powell.

Back in Stellenbosch, Powell had to adjust his plans for the North American trip and the fifth and sixth legs of the World Series after the news that the next two tournaments, Hong Kong and Singapore, were rescheduled for October.

“That had an impact on our planning and the way we wanted to manage some players and even management, said Powell.

“The end goal of the season remains the Olympic Games in Japan in July and how we arrive there best prepared, so we needed to change our plans when those two tournaments were moved to October.

“We are still trying to find ways to counter that 10-week period that will now be without matches and we are discussing various options.

”For the here and now, the extra day in Los Angeles will give us more time to recover and then prepare for what awaits us on Saturday.

“We have done some good work back home, but there is still work needed on defence and on attack, where we can be sharper. We are striving for a perfect performance, so will work hard this week,” added the Blitzbok coach.

The Blitzboks’ playing schedule (SA times) in Pool B: