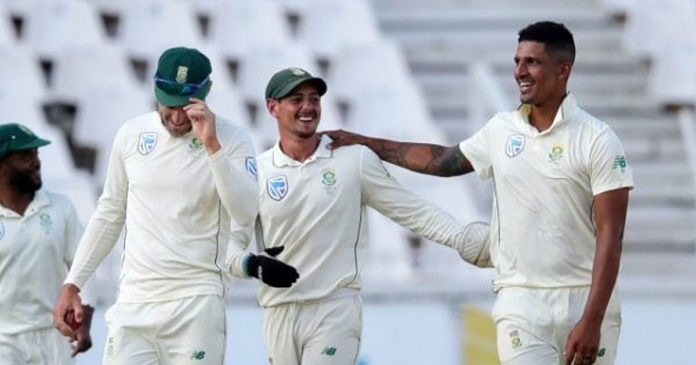 Beuran Hendricks claimed a maiden five-wicket haul on debut and Quinton de Kock claimed a world record for the quickest wicketkeeper to 200 dismissals as the Standard Bank Proteas regained their fighting spirit and pride on the third day of the final Test match against England at the Imperial Wanderers Stadium on Sunday.

England nevertheless continue to hold the trump cards as they have set the Proteas to make 466 for victory in the remaining two days.

It was  a heroic performance by the Proteas seamers who were deprived of the services of Vernon Philander’s final Test match bowling effort as he was ruled out by a hamstring strain after sending down only 9 deliveries.

Admittedly, some of the England batsmen gave their wickets away in the chase for quick runs but it was still a notable effort to bowl them out in little more than 60 overs.

It must also have left the South Africans wondering how much better their position could have been had they not had two bad periods of play when they first allowed England to get away with a century stand on the opening morning when bowling conditions were favourable and then when they allowed the England tail-enders to smash 82 in 10 overs and then lost 6/88 in reply.

Be that as it may, the Proteas may have put in some useful building blocks for the future even if the immediate present has some dark clouds.

Hendricks took 5/64 in an effort from which he will have learned a great deal and there were also good performances from Dwaine Pretorius who had earlier scored valuable runs in partnership with De Kock and Dane Paterson (a remarkable 1/18 in 13.3 overs).

Anrich Nortje completed an admirable quartet with two wickets to give him 7 in the match. He is the leading wicket-taker with 18 in the series and Stuart Broad is the only realistic person to have a chance to overtake him and to do that he will have to run through the Proteas as he did in his previous Test match at this venue.

It is, in fact, one of the ironies of the series that the Proteas could have the leading runs scorer in the series as well in De Kock whose first innings 76 is the top score in the match to date.

De Kock achieved his 200th dismissal in only his 43rd Test match as wicketkeeper. Overall this was his 47th Test match but he was not the designated keeper in two of those matches and did not keep in two others because of injury when AB de Villiers deputized.

The third day was a triumph for England fast bowler Mark Wood who completed a five-wicket haul to go with the valuable runs he had made the previous day.

Joe Root made the only half-century when England batted a second time, but they had useful partnerships down the order, the most important probably being the 56 for the first wicket between Zak Crawley and Dom Sibley that made sure that the South Africans would not bowl themselves back into the match following their first innings deficit of 213.