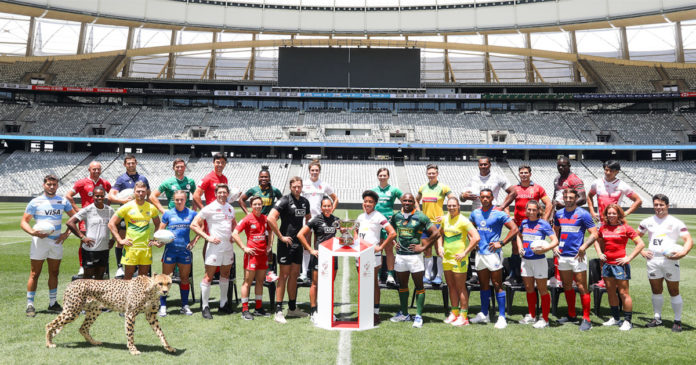 The Springbok Women’s Sevens squad are grateful and honoured to be part of the HSBC World Rugby Women’s Sevens Series for the first ever event and hope to take in all the excitement, the significance and the passion of what the tournament will bring.

“But,” said Imbokodo captain Zintle Mpupha, “we don’t just want to be ‘present’.

“We are really determined and hoping to compete.

“Yes, it will be great to be part of it all, but we also want to add something to the tournament; we want to showcase what we can do and test ourselves against the best teams in the world.”

Mpupha said the squad realise the toughness of their Pool A draw. They will face New Zealand on Friday during the opening day and on Saturday will face Russia and Fiji. The New Zealanders are fresh from winning last weekend’s tournament in Dubai and are the Rugby World Cup Sevens champions.

“We realise that they will be a massive challenge, but how else would you want to test yourself than against the best teams out there,” said Mpupha.

“The next level will be a steep one, but we want to play there and the sooner we know what that level is, the sooner we can get there.”

The team had some inspiration from none other than Springbok captain, Siya Kolisi, who came to visit them for a talk.

“Siya told us not to worry about what other people might think or say, but to keep believing in what we want to achieve,” she said.

“He used the example of Faf de Klerk, who was crucified by all for his tactical kicking, but after the final was lauded by many as the best scrumhalf in the world.”

“This is new to us being at home and we are all terribly excited and nervous. It is good to see how calm some of the players are though and that is encouraging for a captain to see,” she said.

Mpupha attended the traditional captains photograph at Cape Town stadium earlier on Tuesday and said the reality is sinking in.

“Next time I will be back here, we will be running out to play New Zealand. How exciting is that going to be,” she said.

Mpupha led the squad at the Commonwealth Games and Rugby World Cup Sevens tournaments as well and that will help the experience of playing at home she feels.

“This is important for us, we really want to make the best of this. We will not be just there to make up the numbers,” Mpupha insisted.

“Preparation has gone well over the past few weeks and we are just happy to get going and are focusing on ourselves – that’s the most important thing. The girls are very excited,” she said.

“It will be the first time for the team playing in front of a huge crowd, especially a home crowd as it’s something that has never happened to us and it means a lot to us to play in front of them. Walking out there on Friday is going to be huge.”