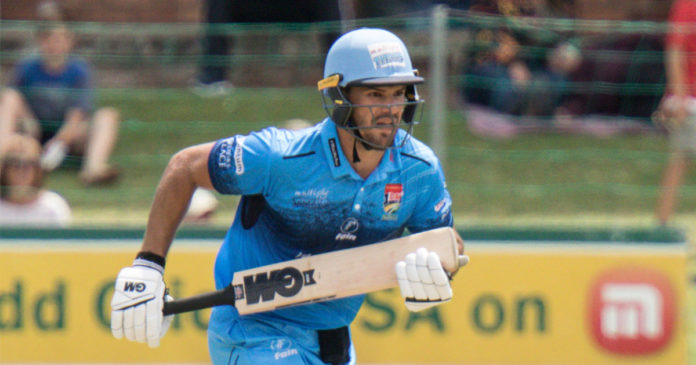 Aiden Markram’s 10th career century was the backbone for the Momentum Multiply Titans to keep their Momentum One-Day Cup semi-final hopes alive after they won the Jukskei derby by five wickets against the Imperial Lions in Johannesburg on Sunday.

The Standard Bank Proteas opener scored exactly 100 (109 balls, 11 fours, 1 six) to anchor a chase of 206 against the underwhelming hosts at the Imperial Wanderers Stadium – the men from Pretoria winning with 32 balls to spare.

Alfred Mothoa (3/36) and Imraan Manack (2/38) also played key roles as the defending champions won for only the third time this season.

Mandla Mashimbyi’s team, who entered the match knowing that they must win every remaining game to keep alive their chances of retaining the title, won the toss and opted to bowl first in the round eight fixture.

And their bowlers responded excellently by keeping the home batsmen in check.

Despite starts from the top three – Ryan Rickelton (32), Reeza Hendricks (22) and top-scorer Dominic Hendricks (45) – they all scored relatively slowly leaving the middle order under pressure.

By the time Dominic Hendricks fell in the 36th over, the score was still 138 and they had to rely on Malusi Siboto’s late unbeaten 30 off 23 balls to even get them over 200 in what was a sluggish innings by a team chasing the Hollywoodbets Dolphins in top spot.

Bjorn Fortuin (2/47) and Siboto (1/41) then ripped through the Titans’ top order, reducing them to 25 for three and boosting the victory prospects for their side.

But Markram, who was watching the wickets tumble at the other end, finally found support in his captain, Grant Thomson (48), as the pair added 109 for the fourth wicket.

That took the Titans within touching distance of the finish line, and despite three late wickets by Wihan Lubbe (3/21), Farhaan Behardien struck an unbeaten 29 to carry the visitors over the line with just over five overs to spare.