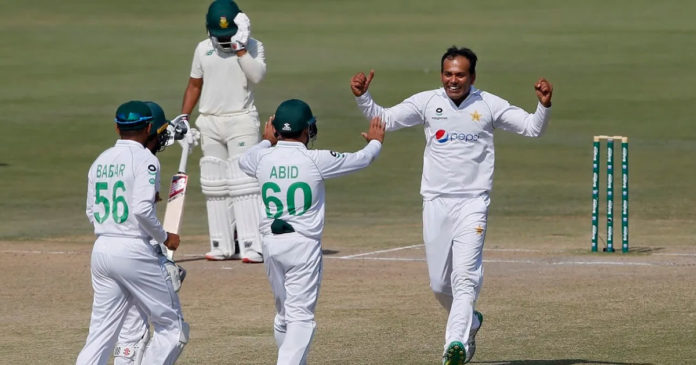 The Proteas failed to build on their fighting day three exploits with the bat and instead folded cheaply on day four of the first Test against Pakistan as debutant Nauman Ali claimed five wickets to bowl the hosts to a seven-wicket win at the National Stadium in Karachi on Friday.

Resuming on 187 for four at the start, South Africa were rolled over for just 245 as slow left-armer Nauman became the oldest man from his country to claim a five-for in his first international game – the 34-year-old nabbing five for 35 in 25.3 painstaking overs for the tourists.

That left the home side needing just 88 for victory, and despite Anrich Nortje claiming two for 24, Azhar Ali and Babar Azam lead their side to a comfortable win midway through what turned out to be the final day.

Defeat for Mark Boucher’s side will be tough, especially after the fighting display with the bat by Aiden Markram and Rassie van der Dussen, who both hit half-centuries in a wonderful 127-run second-wicket stand on Thursday.

The pair dug deep, before both fell along with Faf du Plessis, late in the day to leave as the Proteas fell from 175 for one to 185 for four.

Temba Bavuma did display some of his fighting qualities with a battling 40, momentarily giving the South Africans hope of at least taking the lead past 100.

Together with George Linde (11), they took the score from 192 for six to 234. But it was the Nauman show from there as he claimed the last four wickets, including that of last-man Bavuma to leave SA all out in 100.3 overs.

Pakistan cruised to 22 for none at lunch, before Nortje dismissed Abid (10) and Imran Butt (12) in the same eighth over, but Azhar (31*) and Babar (30) settled nerves during a 63-run third-wicket partnership that led their side to victory.

The second and final Test of the tour gets underway in Rawalpindi next Thursday.