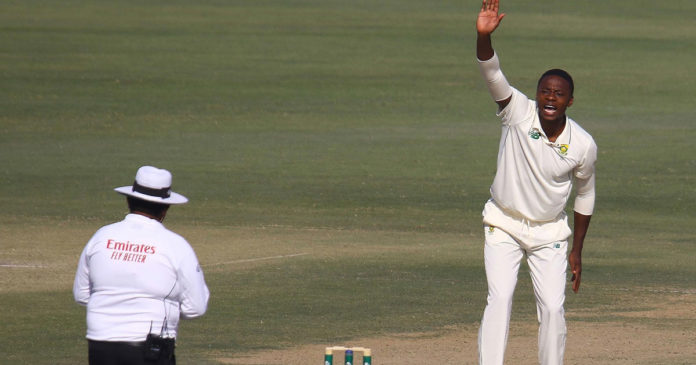 Kagiso Rabada became the eighth South African to claim 200 Test wickets on an improved day three of the first Test against Pakistan, although late wickets tipped the scales strongly in favour of the hosts in Karachi on Thursday.

The Proteas reached stumps at the National Stadium, limping on 187 for four following a horrendous final half-hour in which they lost star batting duo Rassie van der Dussen (64 off 151 balls, 5 fours) and Aiden Markram (74 off 224 balls, 10 fours) as well as the dependable Faf du Plessis (10).

Their twin top-order half-centurions had batted together for a large part of the day, digging in, and working their socks off for a second wicket partnership of 127 that had taken the tourists to 175 for one, before the late meltdown.

Before that, the tail of the home side had bitterly frustrated South Africa, with the last two wickets taking their lead from 88 overnight to a mighty 158 as they were eventually dismissed for 378.

Despite that, though, it was a much better day for Mark Boucher’s side, which began with Rabada (3/70) joining the 200 club alongside countryman Dale Steyn, Shaun Pollock, Makhaya Ntini, Allan Donald, Morne Morkel Jacques Kallis and Vernon Philander.

The 25-year-old, who bowled Hasan Ali (21) to reach the milestone, also became the third quickest to the mark in terms of deliveries, behind Pakistan’s Waqar Younis and Steyn, while his strike-rate of 40.8 is the best in the world amongst bowlers to have claimed 200 wickets.

But after that, Rabada and co struggled to claim the final wicket as Yasir Shah (38 not out) and Nauman Ali (24) added 55 for the final wicket, before Keshav Maharaj (3/90).

The batsmen then faced a tough task to get the visitors back in the game, but to their credit, openers Markram and Dean Elgar dug in by batting for 16 overs for their opening stand of 48.

Their partnership ended when the latter, who had been struck on the baby finger of his left hand a little earlier, fell to Yasir (3/53) for 29, the wicketkeeper Mohammad Rizwan claiming a very good diving catch.

It was then over to Markram as he and Van der Dussen produced one of South Africa’s best partnerships witnessed in the sub-continent during recent years to get their side back in the game.

They worked hard to erase the deficit and put the Proteas into the lead, before Yasir struck again to unseat Van der Dussen, caught at silly mid-off.

Du Plessis then became Yasir’s third wicket when he was trapped plumb in front and things got worse for the away side three balls later when Markram offered another chance to silly mid-off Abid Ali, this time Nauman (1/27) the bowler much to the frustration and disappointment of the batsman.

It left nightwatchman Maharaj (2*) and captain Quinton de Kock (0*) holding on until stumps with their side precariously placed only 29 ahead.