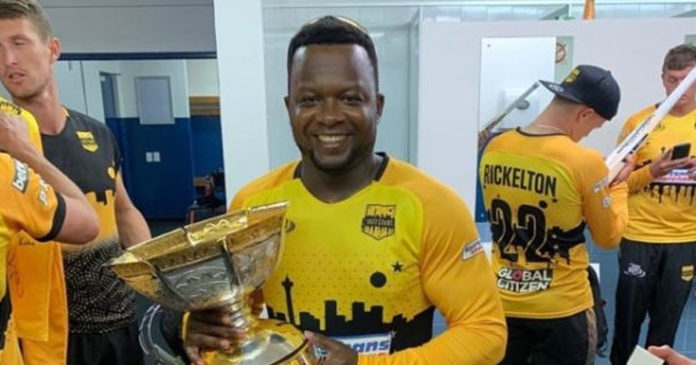 The second edition of the Mzansi Super League (MSL) launches tomorrow with new Jozi Stars coach Donovan Miller saying that the buzz and excitement has left him losing sleep in the build-up to their opening game against the Cape Town Blitz in Johannesburg.

The new season is set to raise the bar on the inaugural season last year, with Jamaican Miller, who replaced champion predecessor Enoch Nkwe, amongst two new coaches and several new household names who have signed up for MSL 2.0.

The opening clash is at the Imperial Wanderers Stadium and the start of five rollercoaster weeks for Cricket South Africa (CSA) that will see 32 matches being played in 39 days. All the games will be broadcast exclusively live on SABC.

And speaking ahead of the tournament opener, the debutant Stars coach says he is excited by the challenge that lies ahead.

“I’m so excited that I’m not sleeping at the moment,” Miller beamed. “I think the great thing for the Jozi Stars is that we have most of the guys that won us the title last year.”

The Stars were the best team overall last year and will no doubt be the team that all the other five will be aiming to gun down in the coming weeks. But their coach is not expecting any extra pressure on his side despite carrying the title of ‘defending champions’.

“I wouldn’t say we’re under any extra pressure, because it’s something natural and it comes down to how you deal with it,” Miller explained. “You can only bring pressure on yourself. If we plan well and we go out and execute then we’ll get close to winning games and once we’re winning games, you’ll get close to where you want to be.”

They have also retained most of the players that did duty for them in 2018, although their big miss will be captain Dane Vilas, who was snapped up by the Durban Heat. However, Miller admitted that having everyone they wanted was impossible.

He also said that he expected Friday’s opponents, the Blitz, and all the other teams, to pose an equally strong challenge during the competition.

“We would have loved to have Dane and the others that are no longer here, but that is how the draft system works,” the Stars coach added. “I was looking at the draft and how all the other teams planned.

“They planned really well, they selected players smartly and they put a lot of thought process into their selections. All the teams are pretty strong, but we have a very strong team as well. We have a lot of winners and we won’t be worrying about the opposition because once we bring our ‘A’ game, we’ll be in.

“Everyone is excited and cannot wait to cross that line on Friday.”

Blitz coach Ashwell Prince is also looking ahead to the start, although he has not been losing sleep about anything.

His side were the early-season pace-setters last year, before going off the boil, although they still managed to go all the way to reach the championship match.

“We will try to keep things the same,” he said. “Momentum is important and last year we obviously started nicely. We got four wins in a row at the start and then we probably lost our way a little bit towards the middle part of the campaign.

“But, as I say, we had momentum early on and we probably would have liked to have had more rhythm towards the end of the campaign, but we weren’t able to quite hit our straps later on.”

Looking ahead to their trip to Gauteng, Prince concluded: “Obviously they won the competition last year, so I suppose that’s the yardstick at the moment.

“We played quite nicely up there last year, we beat them at the Wanderers. It will be good to go up against them early in the competition and get a good idea of where we are, also where they are, and take it from there.”

Tickets are on sale at R60 per ticket and are available across TicketPro and other retail outlets, including online sales at www.ticketpro.co.za.